In a series of proposal photos shared exclusively with PEOPLE, the singer-songwriter can be seen looking pleasantly shocked and surprised

The third member of the trio, Natalie Stovall, was in on Moody's proposal plans and artfully arranged for Wayne to meet her at Ocean Way for a recording session. But instead of Stovall waiting to greet her, it was Moody stationed out front, ready to get down on one knee.

In a series of proposal photos shared exclusively with PEOPLE, Wayne can be seen looking pleasantly shocked and surprised as she approaches the studio and spots Moody. After Wayne says yes to the big question, Stovall emerges to pop the champagne for the newly engaged couple before she and Wayne FaceTimed Cooke to share the happy news and celebrate virtually.

Wayne and Moody went public on social media with their budding relationship this past October, both posting cozy pics of one another a couple of days apart. Just two months later, Wayne and Moody shared various pics of each other as they enjoyed a pre-holiday getaway together in Aspen, in which they stayed at the luxurious resort The Little Nell.

"Love in the air in Aspen," Wayne wrote alongside a pic of her in her winter garb outside the resort. Other pics also showed Wayne looking rested and happy, with one showing her and Moody canoodling on the slopes.

And then, just a week ago, Wayne shared a gorgeous black and white pic of the two with a caption that read "best part of my 2020."

2020 has certainly been a banner year for the country trio, both personally and professionally. Earlier this year, they released their first Christmas EP When I Think About Christmas, with the title track co-written by Wayne herself. Runaway June also released their critically acclaimed single "We Were Rich," serving as a worthy follow-up to their record-breaking single "Buy My Own Drinks."

Granted, this pandemic-stained year has also held its share of challenges for the group. Back in March, Wayne — who was previously engaged to country artist William Michael Morgan — herself battled COVID-19, and two months later, Hannah Mulholland made the decision to leave the group. (She was replaced by Stovall soon after.) But, even in the midst of a pandemic, the world has learned that love always wins.

"Happy birthday to the man I get to spend the rest of my life with!!!" she captioned a ring selfie with Moody. "I love you. Can't wait to celebrate the day with you... ❤️💍" 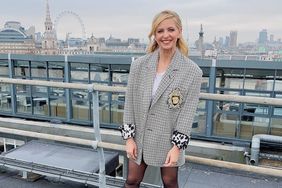