Rachel Wammack Marries Noah Purcell: All the Details from Their 'Southern Elegant' Wedding

The "Damage" singer married her boyfriend of almost two-and-a-half years on Saturday in her hometown of Muscle Shoals, Alabama

The “Damage” singer and her boyfriend of almost two-and-a-half years, Noah Purcell, tied the knot on Saturday at Cypress Lakes Country Club in her hometown of Muscle Shoals, Alabama, PEOPLE confirms exclusively.

“We knew we wanted to do it in my hometown, Muscle Shoals, because Noah’s family is spread out over Montana, Idaho and Missouri, and so we didn’t want to have to ask both of our families to travel to Nashville,” Wammack tells PEOPLE. “Cypress is beautiful and newly renovated, and my mom used to take me to swim at the pool there as a little kid.”

For the wedding, Wammack, 25, and Purcell, 21, brought their “Southern elegant” theme to life with champagne, blush and navy décor and lots of greenery, including a customized handcrafted floral arch with glowing floor lanterns by David Christopher’s Artistic Design in Sheffield, Alabama. Additionally, they placed romantic lighted trees down the aisle.

Standing beside the couple on their big day were five bridesmaids and groomsmen each. Wammack enlisted her friend Faith Kelley, whom she has known since the age of 2, as her matron of honor, and Purcell enlisted his brother, Luke, as his best man. During the ceremony, Purcell’s father married them.

Wammack wore a Justin Alexander wedding dress, which she ended up custom-designing after trying on dresses with the designer’s team and her mom in Atlanta.

“Everyone loved the top of one dress with the bottom of another, and the team decided to combine the looks to make it an original for me,” she says. “So they took the bottom of the one and completely redesigned the top to look similar to the other top style. It was a dream come true to be able to do that.”

Out of the eight or nine dresses total that Wammack tried on, she says she took the bottom of the very first dress she tried on and the top of the last.

“The dress looks right out of a fairy tale with a touch of boho and romance,” she says. “The bust has beautiful detail, and the train is my favorite part.”

To complete her look, Wammack accessorized with rose gold Kendra Scott jewelry, as did her bridesmaids. Lacey Campbell at Parlour 3 in Brentwood also gave her a big, glamorous updo for the ceremony, while Rachel Tenpenny of Brasspenny Photography took the photos.

When it came time for the reception, the newlyweds enjoyed their first dance to Randy Newman’s “Feels Like Home.”

“We both come from very different versions of home, and when we met we found home in each other,” Wammack says. “This song sums us up.”

From Brittany & Jax to Joe & Sophie: All of the Celeb Couples Who’ve Tied the Knot in 2019

Wammack and Purcell first met while working together at a bistro at a Marriott in the Green Hills neighborhood of Nashville. Wammack had been there for almost a year when Purcell got hired, and initially, she says she was not romantically interested in him.

“He claims I was too out of his league for him to even try,” Wammack says. “So we worked together and we became great friends. I began to admire him because of his humor, work ethic and respect for me. He took interest in me without feeling like it was flirting, just natural.”

When she got her record deal, Wammack says she was sad to tell Purcell that she would be quitting soon.

“My last day I asked him if he would want to hang out, and I started flirting with him a lot,” she says. “It was like God turned a light switch on and I just saw him differently. We started hanging out on our own time and fell in love.”

Purcell proposed to Wammack on the evening of March 11. Earlier in the night, Wammack had played a show at City Winery in Nashville but Purcell — who is a full-time student right now — told her he couldn’t make it because of homework. After the show, she stopped by to see him.

“When I got to his place, he asked if I wanted to go hang out at the Parthenon at Centennial Park,” Wammack says. “We are both pretty spontaneous so I didn’t think anything of it; and he had asked me to be his girlfriend on a bench there, so we like to go there occasionally and talk or go inside the Parthenon to the museum. On the way there we even stopped for food, and he didn’t show any nerves or give himself away.”

“We finally got to the park and he said, ‘Let’s find our bench,’ so we went and sat at ours,” she continues. “Within the next few minutes, he was down on one knee asking me to marry him.”

For Wammack, the proposal couldn’t have come at a more perfect time.

“We both were ready and didn’t want to wait any longer,” she says. “So we had a short engagement, and it’s finally here!”

Wammack credits their shared faith, trust and open communication as the “solid foundation” of their relationship, and she can’t wait for her and Purcell to “come home to each other at night no matter what our days have been.”

With the wedding now behind them, the newlywed couple will soon head to Cabo San Lucas, Mexico for their honeymoon.

Wammack — who released her latest single, “Something People Say,” in June — will then continue playing festivals this summer, and she will open for Reba McEntire‘s shows in Minnesota and Illinois on Aug. 17 and 18. In October, she’ll head overseas as part of the Country Music Association’s touring series, “Introducing Nashville,” with concert stops in Norway, Sweden, Germany, the Netherlands, Scotland and the U.K. 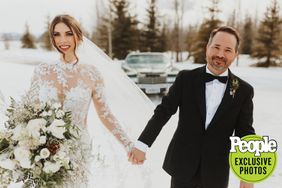