Miranda Lambert and new husband Brendan McLoughlin are celebrating their first Christmas as a married couple.

The “It All Comes Out in the Wash” singer and New York Police Department officer spent the holiday together relaxing in sunny Texas.

In one photo, Lambert and McLoughlin, 28, pose with the country star’s brother, Luke Lambert, and his significant other. Another snap features the newlyweds smiling in front of a scenic body of water along with one of their adorable pups.

The final photo is a collage of the smiling couple, who pose with McLoughlin’s arms around his bride. The rest of the collage is made up Lambert’s many horses, dogs, cats, and rabbits, and reads, “Love from the McLoughlin herd” along the top.

The “Little Red Wagon” singer also shared how much she loves the Texas winter on her Instagram Story, writing, “cutoffs on Christmas! Oh Texas how I love you.”

Last month, Lambert walked the red carpet at the 2019 Country Music Association Awards in Nashville with McLoughlin by her side.

The couple has been making the red carpet rounds since secretly tying the knot in January, with Lambert recently telling PEOPLE that her native New Yorker husband has opened her “eyes to a whole new world” with city living.

“My husband is very open and happy to travel and could be ready to go anywhere in 15 minutes,” she said of McLoughlin, who joined her on her “Roadside Bars & Pink Guitars” tour this fall while taking leave from the police force. “I love that. Kind of met a kindred spirit there.”

Lambert also opened up about falling fast and hard for McLoughlin, whom she met outside of Good Morning America last November while visiting the show to promote new music with her band the Pistol Annies.

“I feel like I’ve been through enough in my life to know what I don’t want, so when I know what I do want I snatch it right up,” she said.

Three months after meeting McLoughlin, Lambert revealed on social media that the two had tied the knot in secret on Jan. 26 at a farm just outside of Nashville, Tennessee. As for why they chose to keep their happy day under wraps, Lambert said that after the scrutiny her love life has received over the years, that decision was a no-brainer.

“I was married before, and it was a huge wedding and everything was very public. So was my divorce,” Lambert said of her previous marriage to Blake Shelton, which lasted from 2011-2015. “I learned then that it’s not for everybody else. This is my actual life. With Brendan, I made it a point to keep it as private as I could for as long as I could.”

RELATED VIDEO: Miranda Lambert Reveals the Real Reason Behind Her Secret Wedding: ‘It’s Not for Everybody Else’

The couple has been splitting their time between N.Y.C. and Nashville, with Lambert previously telling Extra that they have “the best of both worlds.”

“We spend time in New York, we get to see our adorable nugget [McLoughlin’s year-old son from a previous relationship], then we get to come back to the farm and have the quiet life,” she told the outlet. “I’m enjoying the balance.”

Though she’ll stay busy with her “Wildcard” tour kicking off in January 2020, Lambert told ABC on the CMA Awards red carpet that she’s developed a new set of hopes for herself in the coming months that don’t necessarily revolve around releasing new music of her own.

“I have so many dreams left,” she said. “I’m starting to set a new set of goals for myself, and more of them are personal now than they ever were, because I was so career-driven early on.” 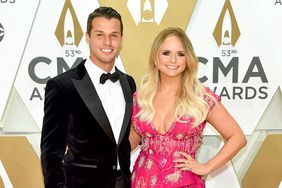