The country singer, 37, shared a series of photos with Brendan McLoughlin to her Instagram on Thursday to mark the former NYPD officer's 30th birthday.

The couple posed in front of what appeared to be their home in a post that Lambert tagged in Nashville, Tennessee.

The singer, who is releasing her new song "If I Was a Cowboy" on Friday, wore a patchwork dress and tan boots, while McLoughlin sported a blue plaid blazer and skinny jeans.

"Gussied up to celebrate this dream boat today! Happy 30th Birthday @brendanjmcloughlin
I love you so much ❤️," Lambert wrote in the caption. "I'm so thankful to have you in my life. Cheers to the next 30 years! #30 #HappyBirthday."

"P.S. I might have gotten him the @kitchenaidusa for both of us! Thanks in advance hunny for all the yummy you use this thing for! 🙋‍♀️🤠🍪🎂🍝," she added. Included in the post was a Boomerang of McLoughlin hugging a KitchenAid package.

The country star and her husband teamed up this summer for a fun music video that remixed one of her songs.

In August, Lambert debuted her music video for the Telemitry Remix to "Tequila Does," a track that originally appeared on her 2019 album Wildcard.

While the song is all about Lambert's love for the liquor, she snuck some real-life romance into the project, too.

McLoughlin made a sexy cameo in a few scenes, along with the couple's family and friends. He showed off his abs in the video, spraying his shirtless body with tanning oil on a dock by a lake when he's first spotted by his wife.

Lambert and McLoughlin tied the knot in January 2019. She was previously married to country singer Blake Shelton from 2011 to 2015. 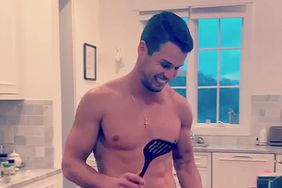