Miranda Lambert is thankful for all the time she's been able to spend with her husband Brendan McLoughlin.

During an appearance on a recent episode of SiriusXM's The Storme Warren Show, the country star, 37, opened up about really getting to know her husband over the past year, now that they've been spending "so much alone time" together.

"I think it was really good," Lambert said of the former NYPD officer, 29, whom she met just months before marrying.

"We didn't date very long before we got married," the singer added. "And so we sort of got to just really, really, really get to know each other. Cause it was just us two with no distraction, at my farm outside of Nashville. And so I was really thankful for it because it made us really strong."

Although the past year has been difficult, Lambert expressed gratitude for the chance to reconnect with what's most important to her.

"A lot of couples, especially a lot of my friends don't really see their significant other because we're different directions all the time. But with everything that happened last year, I think everybody was forced to sort of reconnect with themselves and with people that they really love and that are close to them," she said.

"And I kept saying there's gonna be a lot of engagements and babies or a lot of divorce," she joked.

Lambert also opened up about her experiences traveling with her husband — including one moment that had the potential to push their relationship.

When it comes to long days behind the wheel, Lambert added that the couple likes to keep themselves occupied.

"We do a lot of podcasts," she said. "So like we don't have to just sit there and twiddle our thumbs and talk while we drive. We like get into Dateline or murder mysteries or something. So that helps."

Another benefit of being on the road together? Getting to watch her "house husband" take care of the chores — sometimes without his shirt on. Lambert, who has never been shy about being a big fan of her husband's chiseled physique, was asked during the interview if she's ever considered doing laundry on his washboard abs.

"Oh yeah. That's a great idea," she said, before recalling one particular moment from their travels, while on the way back from Georgia.

"There was a laundry right across from where we parked," she said. "So I had to do some zoom meetings and he did the laundry. I was like, house husband on the road this is great."

"2 years hitched!! ❤️ @brendanjmcloughlin," Lambert wrote alongside a special photo from her "Settling Down" music video, which featured her husband, along with the hashtag #anniversary.

In his own tribute, McLoughlin had nothing but loving words for his wife.

"Happy anniversary to this amazing woman," he wrote in his own post, sharing a playful photo of Lambert in the kitchen. 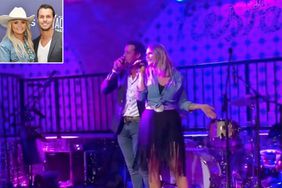