Inside Maddie Marlow's Whimsical Tennessee Wedding: See All the Photos

"We both can’t hold back happy tears," she said. "It’s been eight years of knowing this was our goal and the fact that it’s finally here is so exciting and very emotional."

"Jonah gave me a promise ring when I was 17 and moving to Nashville. It was from David Yurman so we wanted to keep that going," the singer, 24, explained.

Marlow's diamond engagement ring has sweet significance as well. "The center stone in my ring was my mom's that my dad gave her 26 years ago," she said.

Marlow's Maddie & Tae partner Taylor Dye stood by her side as a bridesmaid— and as an official wedding witness. "She's going to be on our marriage certificate forever," Marlow told PEOPLE of Dye, whom she also enlisted to choose the bridal party's Watters dresses.

The country duo released the second part of their three-part album, Everywhere I'm Goin', in October.

The couple chose maroon and mixed metal colors to bring their fall and winter theme to life, seen here in florals from Fresh By CarryAnn.

"Ironically enough, maroon was our high school color!" said Marlow, who first met Font, 25, eight years ago during her sophomore year of high school in Texas. "The general decor is very fall and winter-driven. It's our favorite time of year so it felt perfect to blend the two together."

Standing beside Marlow and Font on their big day was a bridal party made up of seven bridesmaids (Marlow's lucky number) and six groomsmen.

Marlow wore a custom-designed gown by designer Anne Barge for the ceremony and reception, which she described as "classic and sexy."

"I wanted to feel sexy on my wedding day but also have some classic elements like lace and a train," said Marlow, who decided on her gown after trying on about nine dresses.

As for the groom, he wore a custom tuxedo by Indochino.

As for the food, the couple went with serving "Thanksgiving dinner" catered by Bacon and Caviar. For dessert, they had a small cake and mini pies by Katelin Hayes Desserts, in addition to a hot cocoa bar "to add in some winter feels."

When it comes to what's next for her and Font, Marlow told PEOPLE, "It's all fun with him. I'm looking forward to more adventures, more memories and our love to just keep growing stronger and stronger."

She added, "We definitely want to have kids one day, but for now we are just going to enjoy each other and keep making amazing memories." 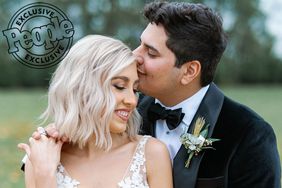