"This is the first time I've been out of the house, Alan," Lynn said after being greeted with a raucous standing ovation by the 800 invited guests

By all rights, Alan Jackson should have been the star of his own induction into the Country Music Hall of Fame on Sunday night. But he somehow got upstaged at the ceremony, and he didn’t mind a bit. In fact, he asked for it.

The multi-platinum artist was allowed to choose which Hall of Fame member would usher him into country’s most hallowed ranks, and he picked his heart’s desire – 85-year-old legend Loretta Lynn – despite the fact she has been recovering from a stroke she suffered in May. But Lynn was determined to accept the invitation, and the ceremony marked her first public appearance in Nashville since her health crisis.

“This is the first time I’ve been out of the house, Alan,” Lynn said after being greeted with a raucous standing ovation by the 800 invited guests. “You’re the only thing that’ve brought me here.”

Lynn arrived on the stage of the Country Music Hall of Fame and Museum’s CMA Theater on the arms of daughter Patsy Lynn Russell and George Strait, who had just sung Jackson’s “Remember When” as a tribute to his fellow troubadour.

Though Lynn was unsteady on her feet, her memories were strong as she recalled her initial encounter with Jackson.

“You know,” she said, “the first time I ever met Alan and seen Alan, he looked like a scared little boy. He was practicing backstage, going through his songs, and I remember I looked at him. I said, ‘You gonna be one of the greatest singers in country music.’ He hasn’t let me down.”

“I love you, honey,” she added, “and I want to say congratulations, and I am so proud of you, and I’m glad that you’re being…” She paused to collect her thoughts. “Hey!” she finally blurted. “You should be here!”

Jackson hopped up from his seat and took the stage, tenderly hugging his idol and kissing her cheek before asking for her help to drape his gold Hall of Fame medallion around his neck.

“I don’t know how to do it,” he said as he towered over the Coal Miner’s Daughter.

“You don’t put on many necklaces, hon,” Lynn joked as she reached up to straighten the medallion.

Jackson, 59, is this year’s inductee in the Hall of Fame’s modern-era category. Other members of the 2017 class are Don Schlitz, who was honored for his songwriting, and the late singer-songwriter-guitarist Jerry Reed, who was inducted in the veteran-era category. The three-hour ceremony included biographic summaries by museum executive director Kyle Young, who emceed the event, as well as musical tributes by such artists as Alison Krauss, Lee Ann Womack, Vince Gill, Mary Chapin Carpenter and Ray Stevens.

Though known as a man of few words – at least without a melody – Jackson spoke at length in his acceptance remarks, recalling his slow rise in country’s ranks. When Jackson arrived in Nashville from Newnan, Georgia, in 1985, Randy Travis (another Hall of Famer who was in the audience) had just struck gold with a traditional country sound, but Jackson had to wait another four long years before his rootsy music would also get noticed.

“Everybody in town had passed on me once or twice and told me to go back to Georgia and everything,” Jackson said. When he finally landed a contract with Arista Records, he said, “to be honest with you … I think they signed me just to show that they were serious about making country music, not pop music. I don’t think any of them had any idea I was gonna sell 60 million albums,” he added with a chuckle.

Jackson thanked all the people who have supported his career over the decades, especially the fans “because that’s what I make the music for.” And of course he drew special attention to his wife of 38 years, Denise, and their three daughters, “who have just been with me every step of the way and inspired me and supported me and told me when I was doing stupid things and kept me in line.”

Quoting his classic 9/11 remembrance, “Where Were You (When the World Stopped Turning),” Jackson described himself as “just a singer of simple songs. That’s all I do … I’m very proud and don’t feel like I really belong here [in the Hall of Fame], but I’m so humbled by it, and [I’ll] just continue to try to make country music as long as I can.”

After Jackson left the stage, he returned moments later, arm in arm with Lynn, Strait and Connie Smith – a full quartet of Hall of Famers.

Together they offered the traditional closing of the ceremony, singing country music’s unofficial anthem “Will the Circle Be Unbroken.” Smith took the verses and shared her mic with Lynn on the choruses, and her familiar voice came through, clear and strong, on the old hymn. 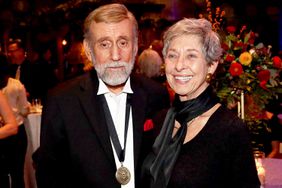