Lennon Stella Has a Hannah Montana Moment on Prom Night

We interrupt this prom for a brief performance.

High-schooler Lennon Stella stepped away from her prom for a bit on Saturday night, leaving the big dance with her date in tow to join her younger sis Maisy and Nashville‘s Charles Esten for a few songs at the St. Jude Country Music Marathon & Half Marathon post-race concert.

The show, held at Nashville’s Bridgestone Arena, featured performances by several stars of the ABC drama, on which Lennon, 14, and Maisy, 10, star as the daughters of Connie Britton’s Rayna James. Esten plays Rayna’s sometimes-soulmate – and Lennon’s dad – Deacon Claybourne.

Lennon, still wearing her ivory prom dress and a halo of matching flowers in her flowing long hair, kept cute date West Theriault close during her performance. Afterward, everyone posed for photos before the teens headed back to their dance.

Fans of the Canadian-born Stellas Tweeted their appreciation and posted their own photos of the night. “Lennon Stella left her prom to go sing with Charles Esten at Bridgestone on Saturday night and she wore her prom dress the whole time,” Tweeted fan Amy Roberts, who also took photos.

Also among Lennon’s fans? Esten, who Tweeted out his gratitude as well. 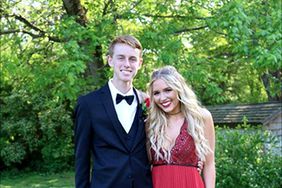 A Dance to Remember! 'Nashville' 's Lennon Stella Goes to Prom with the Son of Her TV Dad Charles Esten 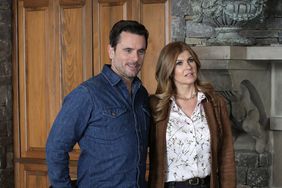 'Nashville' 's Charles Esten on Connie Britton's Finale Return: 'It Wouldn't Have Been the Same'