Kiss Me at Midnight! Lauren Alaina Is Looking Forward to 'Kissing My Fiancé' on New Year's Eve

It's my first time kissing him [on New Year's Eve] as my fiancé!" Lauren Alaina tells PEOPLE, while gearing up for "Dick Clark's New Year's Rockin' Eve"

After a year full of highs and lows, Lauren Alaina is ready to kiss 2018 goodbye – literally!

To ring in the new year, there’s one “goal” she’s tackling from the moment the clock strikes 12 a.m.: to kiss Alex Hopkins for the first time at midnight as her husband-to-be.

“I will definitely be partying and kissing my fiancé at midnight!” Alaina, 24, tells PEOPLE while gearing up to perform her latest track "Ladies in the '90s" during Dick Clark’s New Year’s Rockin Eve with Ryan Seacrest‘s West Coast telecast. “It’s my first time kissing him as my fiancé!”

The American Idol alum, who got engaged to longtime boyfriend Hopkins, 23, in July after dating since 2012, adds: “I don’t know what we will be doing because of the performance, but I know we will be celebrating and having a good time wherever we are.”

New year, new New Year’s Eve performance! As a “huge” fan of the annual holiday, the "Road Less Traveled" singer was dreaming while she was awake last year when she watched the sparkling Waterford crystal ball touch down in the middle of Times Square – and witnessed all the love surrounding it – making her want to be “a part of New Years every year now!”

“It was the best thing that’s ever happened to me,” she says. “The moment when everyone is counting down and the ball drops — it’s the craziest thing [because] everyone just erupts, and then there’s this moment of silence where everyone is kissing.”

From Kelsea to Lauren to Raelynn: Meet CMT’s Next Women of Country

“It’s the most magical thing I think I’ve ever been a part of,” she continues. “There’s so much craziness in the world right now, but in that moment when the ball dropped in New York City, the whole city was united and you just hug people you don’t know.”

And could a kiss be the mark of two major milestones in Alaina’s new year?

“We haven’t picked a date yet only because we tour so much, and everyone gets married on the weekends and I work on the weekends, so we’re trying to work all that out,” Alaina says about her impending wedding. “We’ll probably have a long engagement because I want to make sure we do everything right and have time to plan it.”

Until then, Hopkins will remain by Alaina’s side for love and support as she braces herself for an exceptionally busy year ahead, getting ready to hit the road with country superstar Blake Shelton on his upcoming Friends and Heroes Tour — and perhaps fulfilling her dream of completing a college course!

“I never got to go to college, [so] something that I know nothing about,” she says. “I wouldn’t do anything that has to do with my life.”

Alaina adds about which subject piques her interest: “I would maybe do history or something.” 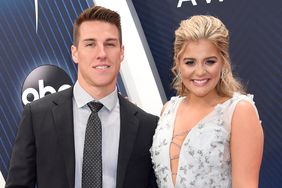