King Calaway joke they're "a man band" who played all the instruments (except pedal steel!) on new EP Midnight

About three years ago, country music fans met the baby-faced international country-pop group through its sweet introduction, "World for Two." Members frolicked on the beach and had a party with friends in the idyllic music video. But that was then.

The group is back and reconfigured after a member's departure with a mature, radio-friendly sound that manages to be both lush and sparse. Now more Eagles than Justin Bieber, the new version of King Calaway sees Simon Dumas and Chad Michael Jervis splitting lead vocals on hooky songs with infectious melodies and big, harmony-rich choruses.

King Calaway's new EP Midnight is available now, and PEOPLE has the exclusive premiere of the group's new video for "Heartbreaker," song three on the four-song EP.

"We recorded it in a really spooky house," Dumas explained of the video. "It looked like an orphanage, and I think the house had been used to film a scary movie at some point. I was frightened."

But, the gritty setting fit because "Heartbreaker" has an edge, and members wanted to communicate that in its video.

"Having us not just standing in a line playing but crowded in the small living space and squishing the drums in there, it felt like we were getting down and dirty, and that's what the song is," Dumas said.

"'Heartbreaker' hits you right in the gut," Jervis added.

The men recorded 16 songs in Ashville, North Carolina, then whittled the list down to the four on the EP, three of which they wrote. They dialed in their musicianship, incorporated more instruments, and made more intentional choices to craft a sample of King Calaway's new direction.

"We played everything on the album except pedal steel – because we can't play that," Dumas said. "We've been testing ourselves in a way, trying to find what was going to come across as most honest. Lyrically it's a little more from the heart because a lot of these are our stories."

The group was largely absent – from the stage and social media – for more than a year because of the pandemic and because members were working to hone in on the most authentic version of King Calaway. Now that they're back with new music and live music has resumed, they couldn't be more thankful to be back on the road playing shows.

"A country crowd is always fun, and I think everyone is just ready to have a good time after being locked up in their house for so long," Jervis said. "We know we love the new music, so to see that they love it, too, is really great."

Dumas says he can feel appreciation and gratitude for playing and enjoying living music again every time King Calaway steps on stage.

"It's awesome," he said. "We want to reiterate the fact that we're a band. There's no need for the word boy to fall into that," he quipped, drawing laughter from the group. "We're just a band – a man band. We're music nerds, and we love getting into the sonics of it, and we love playing live." 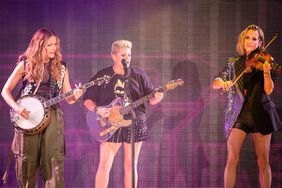