The musician married the Texas Rangers catcher on Thursday, her rep confirms to PEOPLE

Kimberly Perry has tied the knot.

Carrie Underwood and her husband, Mike Fisher, Miranda Lambert and Blake Shelton were reportedly among the guests at the wedding, along with her brothers and band mates Neil and Reid Perry.

Perry, 30, first met her new husband in February 2012 at the Florida Strawberry Festival, after the baseball player used some connections to arrange a meeting.

Arencibia, 28, popped the question last fall with a 3.3 carat ring, underneath an oak tree in the backyard of her parents’ home.

“We are such a tight-knit group of Perrys, both in business and personally, so it takes exactly the right person to really walk into that world and hold his own,” she tells PEOPLE Country. “He definitely is a guy that walks that line perfectly. This is that one that I’ve waited for.”

E! Online was first to report the news. 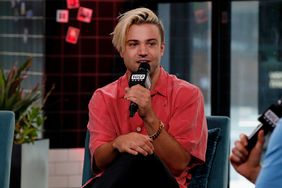