Jimmy Wayne is a country music star, but he’s also a hero for foster kids across the country.

In an exclusive interview with PEOPLE, the “Stay Gone” singer discusses the scarring childhood that inspired his activism, and reveals details about his upcoming children’s book intended to raise awareness for kids in the foster care system: Ruby the Foster Dog.

“People think that foster kids are bad and they’re in foster care [because they committed] a crime, but that’s not true,” Wayne, 44, says about what inspired him to write the book, which is told from the perspective of his real-life dog, Ruby, and will be released in November.

The book draws from aspects of Wayne’s 1,700 mile walk across the U.S. in 2010, which he did to raise awareness for the thousands of children who age out of the foster care system and become homeless when they turn 18. He found and adopted Ruby during that long trek, and the upcoming book follows Ruby and Wayne’s journey across America. Along the way, they learn about loyalty, forgiveness and trust.

“A lot of kids are in bad situations, just like ‘foster dogs’ so to speak, which are in shelters [even though] they haven’t committed a crime,” Wayne says. “The [foster care] children and the dogs actually have the same story: They’re in a home, a shelter and they need help. They need love, to be adopted and to be given a forever home.”

Wayne has already helped to change laws in multiple states to allow children to stay in the foster care system until they’re 21. Although Wayne already released a bestselling memoir, Walk to Beautiful: The Power of Love and a Homeless Kid Who Found The Way, thatrecounted his transformation from foster kid to country star, Wayne realized that the book was too “gritty” for young children — which is the audience he’s most eager to reach.

Wayne has been open about his foster care journey in hopes that it will inspire others who are struggling.

In his previous memoir, Wayne reveals his stepfather once put a gun to his head and he was abandoned by his mother at a bus station when he was 13 years old. Throughout his childhood he faced abandonment, multiple homes, homelessness, and witnessed a violent murder.

“Being hungry hurt worse than anything,” Wayne says when asked about the most painful memory from his childhood. “There’s no pain like that. When you’re hungry and you go for one or two days without eating — that is the worst pain.”

Now, Wayne is back in touch with his mother — and is honest about their relationship now.

“It’s really hard for her to forgive herself, but I keep telling her, ‘Mom, I love you. It wasn’t your fault. You suffered through a lot of illness.’ She still does,” he says. “That’s part of what’s keeping her from forgiving herself.”

Wayne was 16 years old when a couple in their 70s — Bea and Russell Costner — took him in and paved the way for him to go to college. He explained that their support saved him, and he wants to ensure other kids have the same opportunities.

“I wish every state would extend foster care to 21 because it gives these children three additional years to transition into adulthood. I know the importance of that because that’s what this family did for me,” he says. “They didn’t give me everything — they said you have to work for it — but it’s so important that you give these children those extra years.”

Wayne is such a champion of the cause that he doesn’t regret that it cost him a record deal. During his long walk from Nashville to Phoenix his record company dropped him.

“I don’t regret anything. I think there’s more positive that has happened since I lost my record deal than ever happened prior to my record deal,” he says.

During that long walk, he says, he “found” himself.

“I was in a brutal, brutal business and we all know it. You don’t realize what all that fan attention does to your mind,” he says. “You lose yourself … until you’re walking across America and find yourself in the middle of Texas around a bunch of men wearing workboots and cowboy hats who could care less about a guy wearing skinny jeans.”

Beyond his self discovery, Wayne is also grateful for the kids he’s helped. The country star says he’s had numerous former foster kids thank him for his activism.

“There is nothing like hearing a kid say, ‘Thank you, you saved my life. I’d be homeless right now if you hadn’t done that walk.’ ” Wayne says.

Those stories of impact and change motivated Wayne to write Ruby the Foster Dog, and he’s more determined than ever to raise awareness about the foster care system. He’s even started his own non-profit, Project Meet Me Halfway, to provide additional support for foster kids. 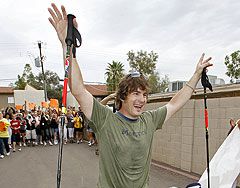 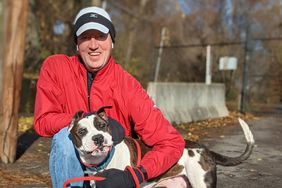 Animal Shelter Volunteer Walks 50 Dogs on His 50th Birthday: 'This Is the Reward Right Here' 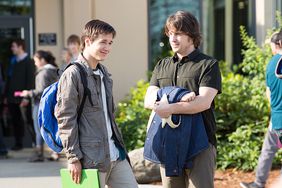 Jimmy Wayne: The Walk That Changed My Life 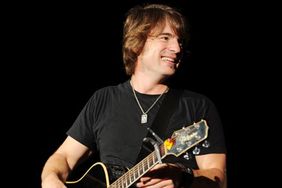 Country Singer and Author Jimmy Wayne Honors His Sixth Grade Teacher: 'She Taught Me a Lot of Discipline'