Jason Aldean: I Wouldn't Want to Be a Reality TV Judge

The country star doesn't hold it against his buddies like Blake Shelton, but says he'd rather stick to his music career

Though his fellow country artists act as judges on reality TV, Jason Aldean‘s favorite kind of party is on an actual stage – not a sound stage.

“I never say never, but I just know doing that stuff takes away from being able to go out and play our shows,” Aldean, named male vocalist of the year at Sunday’s Academy of Country Music Awards, tells PEOPLE. “For me, if I’m not out on the road playing in front of people then I would be miserable.”

That said, the singer, who’s currently in the middle of his Night Train tour, doesn’t hold it against his buddies Blake Shelton and Keith Urban for what they do on The Voice and American Idol.

Explains Aldean: “You become wrapped up in that stuff and have to take a lot of time off to do [reality TV].” 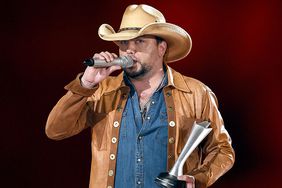