Jana Kramer is thanking her fans for their support following the news of her separation from husband Mike Caussin.

In a touching Instagram post on Saturday, the 32-year-old country star expressed her appreciation for the words of comfort she has received since the news broke on Wednesday.

“I just wanted to say thank you to my fans for all the love,” the “Circles” singer wrote. “Your continued support means the world too. Thank you from the bottom of my heart.”

The words came on a caption of a photo of Kramer and her 7-month-old daughter, Jolie.

“This has been an extremely hard time but Jolie has given me more strength than I ever thought possible,” she explained.

The One Tree Hill alum and Caussin, a former NFL tight end, began dating back in August 2014. The couple got engaged just four months later. The two wed in May 2015 in Charlottesville, Virginia.

After announcing her pregnancy in August of that year, Kramer and Caussin welcomed their first child, daughter Jolie Rae, on Jan. 31 in Nashville.

The couple are taking a break as Caussin enters a rehabilitation center for an undisclosed treatment.

Caussin, 29, retired from the NFL in 2015 after a knee injury followed previous hip issues and a torn ACL. “I’ve never been more proud of my husband for his grace and strength departing and leaving a job he loved so much, but injuries plagued his future,” Kramer wrote in her PEOPLE blog at the time.

“This has been difficult for Jana but her priority is being there for [7-month-old daughter] Jolie,” a source close to Kramer told PEOPLE.

Confession Time: Jana Kramer on the One Dress She Totally Regrets

Kramer, who was named the 2013 Academy of Country Music’s new female vocalist of the year, is currently on tour promoting her latest album, Thirty One.

“The constant variable in all of this has been Mike. He has been insanely caring, reliable, and to see him with our daughter makes me melt,” she wrote in a PEOPLE blog about life on the road. “I can’t wait to see the relationship they build and for him to show her how a man should treat a woman.” 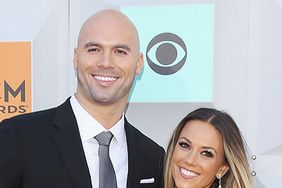