"When blow ups or fights happen sometimes we believe it's done and over but really it's a moment for growth," Jana Kramer wrote on Instagram alongside a crying selfie

Jana Kramer is once again getting candid about the ups and downs in her relationship with husband Mike Caussin.

On Tuesday, the country singer, 37, shared a photo of herself crying to Instagram. In the caption, she revealed that the snap was taken "a few weeks ago" in Canada after an argument she had with the retired NFL player, 34.

"Nothing is perfect," Kramer wrote. "I took this picture to almost remind myself that even though in the moment it seems like everything is doomed it's not."

"No relationship is perfect and when blow ups or fights happen sometimes we believe it's done and over but really it's a moment for growth and more understanding and to lean into your partner," she added.

Kramer went on to write that "when you're in the middle of the fire," it can be "hard to lean in and see that."

"Just know it's not the end of the world," she wrote. "And we all have these moments so ur not alone. Fights happen. No relationship is perfect.. Now the Important thing is in the end are you fighting the good fight together? ... ur not alone in ur struggles xo."

In the caption, Kramer also teased that she and Caussin discussed the fight in question on the new episode of their Whine Down podcast.

During the episode, the couple — who tied the knot in 2015 and share two children together, daughter Jolie Rae, 5, and son Jace Joseph, 2 — explained that things started to come to a head between them in Canada while Kramer filmed her upcoming new movie and Caussin took care of their kids.

"I think no matter what going into a situation like that, you're accepting your roles," Caussin said. "Just like when there's someone in a relationship that stays home with the kids all day, [and someone who] is going to work. [They] come home, and they're tired from work, the other one is tired with the kids, and it's that kind of push and pull, 'Who's more tired?' So I think there's some of that light resentment."

"You're freaking exhausted, you're working all day," he continued. "You maybe needed more things from me, and then I'm with the kids, and it was hard just to pop by and see you from time to time ... I think there was some of that, and the fact that we weren't able to see each other and connect ... I felt like [there was] lack of respect for what I was doing."

After a busy work week, Caussin said that he and Kramer "didn't always get along" by the time the weekend came, and "that was tough."

Kramer recalled one fight in particular in which "mean words" were said. "It's been a long time since I've used mean words and gotten mean like that, and it sucks," Caussin said.

"The words are what have stayed with me and you don't mean those, but they are the worst things that stay with someone," Kramer said. "I said mean things but you cut deep … I'm like high school mean. You're like [X-rated] mean. Neither are right."

Caussin then said that he and Kramer "are different" in the way that they hold onto words.

"You've said some mean words and mean things to me, and I don't hold onto those like you do, but we're different people and that's okay," he said. "It's just me trying to force the upper hand or force respect, which is just a bad way to do it."

Before moving on to their next topic, Kramer acknowledged that fights between her and Caussin are going to happen.

"Everybody fights," she said. "You don't want blow ups all the freaking time. There was a lot of factors that went into it, but we need to now, from that, go to our therapist and dissect things and process things ... The moral of the story is try not to hold things in, communicate from a good place and don't be high school Jana or college Mike."

Last year, Kramer and Caussin debuted their book The Good Fight: Wanting to Leave, Choosing to Stay, and the Powerful Practice for Loving Faithfully. In the relationship self-help book, Caussin opened up about struggling with sex addiction, as well as his history of infidelity.

Back in May 2020, Kramer spoke to PEOPLE about the process of writing The Good Fight, revealing that Caussin initially wasn't on board with divulging so many personal matters, even though they have previously been open about the issues.

"[At first] I was writing a book about my life and our relationship, and at the time we did a treatment that I gave to Mike. He just ripped it up and was like, 'You're not releasing this.' [He was] just full of shame, which I get [now]. At the time I was like, 'I want to help people,'" Kramer said.

"This was within the first calendar year of everything happening," added Caussin. "It was still real new for both of us. I was still so stuck in shame that I didn't see the silver lining of how we can help other people because I was so small at the time."

"We're not trying to claim that we have it all figured out," he continued. "We learned from clinical professionals that we've had in our lives steer us in the right direction. We have the tools." 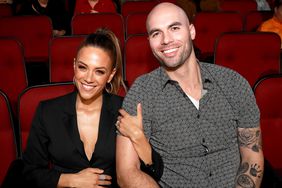