"For the first time in my life, I feel okay," says Jamie Lynn Spears, who opens up about surviving child stardom and managing mental illness in her new book Things I Should Have Said

Jamie Lynn Spears is ready to share her story.

The Sweet Magnolias actress and country singer-songwriter, 30, is opening up about how her father's alcoholism and the pressure to be perfect led her to struggle with crippling mental health issues — and how she found strength in marriage and motherhood.

"For the first time in my life," Jamie Lynn says in the new issue of PEOPLE, "I feel OK."

It has taken Jamie Lynn years to be able to live life on her own terms, as she details in her new memoir Things I Should Have Said (out Jan. 18), in which she recounts how child stardom, becoming a teen mom and her daughter Maddie's near-death accident changed her life.

Jamie Lynn grew up in Kentwood, Louisiana, where she and her older siblings, pop icon Britney and Bryan, were raised by dad Jamie and mom Lynne.

While Jamie Lynn remembers "feeling very loved" as a child, her home life was unstable. Her parents — who divorced in 2002 — were together on and off, and her dad, she says, was an alcoholic whose temper and absences created "anxiety and unpredictability."

She found solace in performing. After appearing in Britney's 2002 movie Crossroads, Jamie Lynn was cast in All That, then starred in the Nickelodeon comedy Zoey 101.

"It was a way for me to control a situation — I didn't have any control as a young child — and I think that it was my saving grace, but also my escape," she says.

But Jamie Lynn also struggled with expectations to be a role model and live up to her famous last name: "Everybody has pressure they put on themselves, but for me, it was on another level because I did have a sister who, in my eyes, was perfect. That pressure felt heavy at times ... I was so afraid of letting people down."

In 2007, Jamie Lynn's world rocked when she learned she was pregnant at 16. The next summer, she and her boyfriend at the time, Casey Aldridge, welcomed daughter Maddie Briann, whom she says "healed something in me that I didn't know I needed healed."

Once she was responsible for another life, Jamie Lynn says she realized "I had to grow up" — and that meant ending her relationship with Aldridge, now 32, who, she writes, was unfaithful and struggled with substance abuse. The split was a difficult decision for Jamie Lynn.

"I was a teen mom, but I was so programmed to be perfect that I was like, 'Wow, I can't also be a single teen mom,' " she says. "More importantly, I wanted my daughter to have what I thought I always wanted: my parents to be together. But then I remembered that my parents might have been together, but it was not a healthy situation. Making that choice was the first time I felt confident to say, 'I have to do this for myself.'"

Jamie Lynn continued to take control of her life in 2013, when she — overwhelmed after years of suppressing her emotions — sought professional help and was diagnosed with depression, anxiety and obsessive-compulsive disorder. "The anxiety was to the point where I couldn't function," Jamie Lynn says, who suffered panic attacks and, at her lowest, would get out of bed only to shuttle Maddie to and from school.

Jamie Lynn treated her mental illness with therapy and, for a time, medication, and she says she's in a good place today. "I'm very conscious not to lie to myself anymore because I think that my biggest issue my whole life was pretending to be perfect."

"I love him because my daughters are getting a father that I always wanted, that they can count on," she says of her husband.

Watson was Jamie Lynn's rock when, in 2017, daughter Maddie nearly died in an ATV accident. Maddie made a full recovery, but the ordeal was a turning point for Jamie Lynn, who says: "When you have the worst thing you can think of in your life happen to you, it makes you look at everything else differently. You have a lot more gratitude."

These days, Jamie Lynn has been focusing on her marriage and life as a mom amid her complicated relationship with her sister Britney. Last week, Britney, unfollowed Jamie Lynn on Instagram, another sign of their strained connection. Since June — when Britney, 40, first spoke out in court against her long-held conservatorship, which was terminated by a judge in November after 13 years — fans of the superstar have attacked Jamie Lynn online, accusing her of not supporting Britney during the conservatorship. She's even gotten death threats.

"I've only ever tried to be helpful, so any notion that says the contrary is just completely ridiculous," Jamie Lynn says of her relationship with Britney, who has repeatedly criticized her family on social media over the last six months.

For Jamie Lynn, "it was really important for me to separate myself from my family to focus on the family I've created, which is me, my husband and my daughters. Setting those boundaries in place was really important," she says. "I am not my family. I am my own person. I fought very hard and worked very hard to establish myself and to build the life that I have today."

In 2008, the same year Jamie Lynn gave birth as a teen, Britney was placed under the conservatorship following a public breakdown, and their dad Jamie and others made all of her personal and financial decisions until its termination in November.

"I didn't have a say when [the conservatorship] happened. My sister was going through a hard time, I was still a child, and that's what everybody, I think, forgets: I was just a kid going through my own crap," says Jamie Lynn, who adds: "My intentions have always been pure when it comes to my family."

While her fragmented family's public drama has been difficult for Jamie Lynn, she remains thankful for the family she created, which, she says, "brought me more peace and more joy than ever.

Adds Jamie Lynn: "I just feel really thankful at the end of the day, because I have the things that truly matter."

For more on Jamie Lynn Spears — including an exclusive excerpt from her book, Things I Should Have Said — pick up the new issue of PEOPLE, on newsstands everywhere Friday. 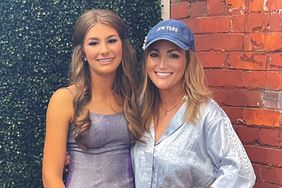