"From writing the songs, recording, mixing and mastering to finally seeing a finished product in my hands has been extremely therapeutic for me," Bryant tells PEOPLE

This country star is singing from experience.

Jacob Bryant is premiering his latest single "Devil & an Old Six String" with PEOPLE exclusively on Thursday — and the country singer opened up about the role performing and songwriting played in his journey to recovery.

"It was like the devil was on one shoulder and an angel was on the other. One kept me an addict and one saved my life. It's a daily struggle to be the best you you can be," Bryant, 31, says of his past struggles with addiction after the death of his mother in 2010. "Now it's about my family, moving forward and writing music that makes people happy."

The single reflects his past struggles, as it starts with soft acoustics and eventually kicks up in tempo when he sings the heartfelt chorus.

"I need these neon lights / Cause that's the only damn thing that gets me high / If I barely make it in on a broken wing / Blame it on the devil and an old six string," he sings.

You may also recognize Bryant from past performances with Luke Combs — including one in 2016 for their collaborative song "Out There." Now, Bryant says he would love to work with Combs again.

"As everyone knows Luke's career has taken off like crazy since we wrote that tune. I am super proud and excited for him. We have stayed in touch periodically since then and I would love to do another collab in the future," the "Pour Whiskey On My Grave" singer says.

When Bryant was writing and recording the album, he says the process became therapy to him.

"Music is healing. As simple as that sounds, the process of creating my art about the life experiences I have had is my therapy," he says. "From writing the songs, recording, mixing and mastering to finally seeing a finished product in my hands has been extremely therapeutic for me."

If Bryant had one piece of advice for his younger self, the country singer says it's to "always stay true to who you are."

"I would tell my younger self to always stay true to who you are no matter the trend at the time. Write your own songs, find your own sound and stick to it. Because when it's your time, it's your time. (And don't get married till you're 30 haha)" he says.

"Devil & an Old Six String" is out on streaming platforms on Friday. 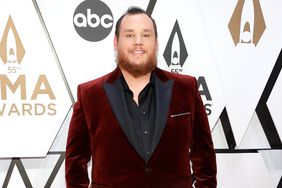