Country Duo High Valley Count Their Blessings in New Song 'Single Man': 'We Are So Grateful'

The pair's ACM Awards nomination "is a huge honor for us because it serves as confirmation that we are welcomed to the party and not so much just trying to fit in anymore," they tell PEOPLE

As country duo High Valley get ready to head off to Las Vegas to continue celebrating their ACM Awards nomination for new duo of the year, the two have much to do beforehand back home.

“I think the kids have three baseball games and two football games before we leave for Las Vegas,” Brad Rempel — husband to wife Rebekah and father of sons Drew, 10, and Cash, 7 — says with a laugh.

“We are in the middle of potty training our daughter, so I feel bad that the grandparents need to take on that while we are away,” adds his bandmate Curtis Rempel. “My wife [Myranda] and I have a 2-year-old [Millie June] and a 5-year-old [Ben], so life in general can be overwhelming. But once the kids are asleep, we will sit there in the doorway and watch them sleep and it’s just beautiful. Life with kids can be a roller coaster, but we couldn’t imagine it any other way.”

This sweet reality of life as a husband and father rings true for both Curtis and his brother Brad. And it’s also a sweet reality of life that found its way into the duo’s new song “Single Man.” Serving as the lead single off their upcoming sophomore project and premiering exclusively on PEOPLE, the truth-heavy song is the first song in some time for the Canadian duo, whose bluegrass-influenced country always has had a way of speaking their own personal truth.

“When you are married and have kids, being a single dude looks fun and looks like it comes with a whole lot less responsibility,” says Brad, who grew up alongside his brother in the isolated Canadian town of Blumenort, Alberta. “But at its core, the song talks about how you wouldn’t trade what we have now for anything in the world — no matter how good it looks on the outside.”

“Country music has always been an honest genre and this song speaks our truth,” Curtis tells PEOPLE about the song, which was written by his brother alongside co-writers Derick Southerland and Jordan Schmidt. “It would be life-sucking for us to not be honest in our songs. It’s just something we have always done.”

The creation of the song came at a time when Brad himself was finding himself straddling the stresses of his professional and personal life.

“I took the red-eye across the country — I had a co-write that morning, and let’s just say I probably looked downright exhausted,” Brad recalls. “But ‘Single Man’ was a great track and a great melody. I loved how it talked about how sometimes, being single looks amazing but it never can beat what we have at home with our family.”

It’s this family that Brad says he often goes to for feedback on songs, especially considering that he has written close to 100 songs for the new record.

“I try not to play for my wife every new song because that would mean I would be coming home every day with a new song to hear,” Brad says with a laugh. “But yes, we share a Dropbox folder that we call ‘Songs to Beat’ where we can continue to add on to that playlist. And ‘Single Man’ was always one of the songs that was standing out to the both of us, especially with that twist in the lyric that I always love.”

And while the duo is back with a bit more of a gritty look and sound on their forthcoming record, make no mistake that this still is the High Valley that fans fell in love with via the duo’s 2016 debut album, Dear Life, which featured the Gold-certified single “Make You Mine” and “She’s With Me,” the duo’s first Top 10 at country radio.

“’Single Man’ still has that sound that we identify with,” says Brad, who has been out on the road alongside Curtis with fellow country stars such as Old Dominion and Michael Ray as of late.

“That acoustic-driven tempo is where we thrive,” says Curtis. “Brad and I grew up playing music with our family at church and in our living room, and we just have always been drawn to that very acoustic vibe. The sound that is made when you mix that old school vibe with a modern take on that is what I think makes our music stand out.”

And as far as they are concerned, that’s what they will remain committed to forevermore.

“High Valley isn’t going through any sort of evolution at this point, because we really feel like we have already found our sound,” Brad explains. “But I do believe we are more confident on their record.”

Five Things to Know About ‘Make You Mine’ Musicians High Valley

And while the ACM Awards will certainly keep them busy, it will also serve as a brief respite from their busy schedule.

“The nomination is a huge honor for us because it serves as confirmation that we are welcomed to the party and not so much just trying to fit in anymore,” says Curtis.

it will also give them and their respective wives a little bit of down time together.

“Our wives have been a part of our music journey for so long,” Brad says. “What people didn’t see were the days when our wives were working and jumping into crowded minivans just to see our show. They have seen us through it all, and we are so grateful.”

To catch country’s biggest stars hitting the red carpet, tune in to Red Carpet Live: 54th Academy of Country Music Awards, kicking off at 6:30 p.m. EST and streaming live on PEOPLE.com, Facebook, Twitter, PeopleTV.com, or download the PeopleTV app on your favorite device. 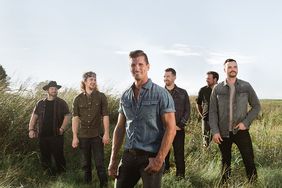