Blake Shelton and Gwen Stefani brought their honeymoon tour to Nashville last week where they celebrated more than their recent wedding.

Shelton headlined Music City's Bridgestone Arena on Sept. 9. But before the show, the couple joined Shelton's record label group Warner Music Nashville, BMI and a small, exclusive group of songwriters and publishers for an outdoor event to recognize the chart-topping success of Stefani and Shelton's duets "Nobody But You" and "Happy Anywhere."

The songs are Shelton's 27th and 28th No. 1 country hits, and Stefani's first and second. The couple held hands and walked on stage to make speeches to thank the songs' writers — and each other.

"Blake Shelton, thank you for letting me ride your coat tails all this time," Stefani said. "I truly am a fish out of water. I'm from Orange County, but I'm wearing cowboy boots for this. I am such a fan of songwriting and writers. When Blake asked me to be on 'Happy Anywhere,' I cried because I was so excited about it. The song is so 'our song' and we're so in love and it really is the perfect way to describe us. When I heard 'Nobody But You' I was so blown away by the song I was jealous that I wasn't on it."

Shelton said they were initially nervous to release duets back-to-back because they weren't sure country radio would support two in a row. Soon after "Nobody But You" went to No. 1, Shelton remembers he drove out of his cornfield, climbed out of his tractor and hopped on a conference call with his team to discuss his next radio single. They sorted through several songs in search of his next solo hit, but everyone agreed "Happy Anywhere" was their favorite. The staff at Warner Music Nashville was charged with going to country radio to say: "Thanks for the last duet, here's another one," Shelton said.

"[We] were laughing earlier that we now know we have to put Gwen on every song I release from now on if we want it to work," Shelton said. "'Austin' (Shelton's first No. 1 song) was 20 years ago this year. To think that 20 years later I would still be standing here [celebrating hit songs] is my dream come true, and it's because of the songwriters in this town."

Songwriters in the crowd included Ross Copperman, Josh Osborne and Tommy Lee James who wrote "Nobody But You" with Shane McAnally. Matt Jenkins, who co-wrote "Happy Anywhere" with Copperman and Osborne, also showed up.

His Past Is Hidden No More: Hit Songwriter Ross Copperman Opens Up as He Releases a Surprising Pop EP

Shelton hopes they keep the songs coming. And, Warner Music Nashville Chairman and CEO John Esposito predicted Shelton has decades of hits in front of him.

"We're just at the beginning of this journey," said Esposito, who pointed out Shelton has 8.5 billion global streams to his credit. "I know in our pocket we have what will be his 29th No. 1 song."

Following the No. 1 party, Shelton and team caravanned the short distance to Bridgestone Arena where the singer's Friends and Heroes Tour filled the seats later that night. Backstage, Warner Music Nashville surprised Shelton with a gargantuan plaque commemorating 20 years of No. 1 singles.

Stefani took out her phone and shot video of the presentation and then zoomed in for a closer look at each of Shelton's single covers, which were displayed in miniature on the plaque.

"I told you 12 years ago that we were going to build a building around you and we did," Esposito told Shelton.

The 6'5" country singer leaned down to take a closer look at his new trophy and quipped: "I'm trying to figure out which of these songs I'm not doing tonight that I should be."

Shelton and Stefani posed for pictures with his newest wall art, bending down behind it because it was too heavy to lift. Esposito took Stefani's phone and snapped a few pictures of the couple just for them to see.

A few minutes later, Shelton headed to the stage to launch his portion of the show. Contemporary country singer/guitarist Lindsay Ell kicked off the night, but when Shelton took over the spotlight was firmly pointed at his heroes and mentors.

"God bless country music, everyone," Shelton bellowed at his enthusiastic crowd. "I'm excited for you all tonight because you have no clue what's about to happen. It's going to take a long time, and I hope you called in sick to work tomorrow."

Over the course of the night, Shelton shared his stage with beloved '90s country hitmakers Tracy Byrd, John Anderson, Martina McBride and Trace Adkins — and of course his new bride. The couple performed the hit songs they just celebrated.

"I forgot the words to 'Nobody But You' because I was staring at her going, 'Oh my God, I'm married to Gwen Stefani," Shelton told the audience.

After the show, the pair walked backstage hand-in-hand. 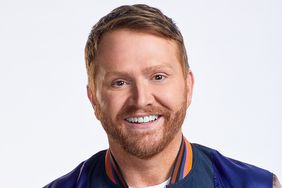 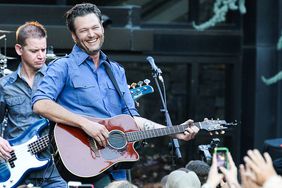 Blake Shelton Throws a Party for 10,000 of His Closest Friends in Nashville