How Chris Young Surprised Cassadee Pope with News of Their Grammy Nomination: 'She Flipped Out!'

Country star Chris Young couldn’t wait to tell friend and collaborator Cassadee Pope about their best country duo/group performance Grammy nod for “Think of You.” In fact, the 31-year-old singer was so excited, he jumped the gun — and actually broke the news to Pope himself.

“I don’t think [I’m] supposed to admit that, but I was in Chicago playing a radio show and found out early. I called her as soon as I knew, because I was like, ‘I’ve got to tell her!’ ” Young tells PEOPLE. “She flipped out, of course, because this song is so special to us.”

After the news sunk in, the pair addressed exciting quandaries like what to wear and how they would get to the show. Pope recently told PEOPLE that Young asked if she wanted to fly to the Grammys together on a private jet he’s taking to Los Angeles on the day of the show, but she declined — for wardrobe reasons.

This is The Voice champ‘s first nomination, but Young is a Grammys vet: His song “Gettin’ You Home” got a nod for best male country vocal at the 53rd Grammy Awards in 2011 (although he lost to Keith Urban for “Til Summer Comes Around”).

“‘Getting You Home’ was my first No. 1, and now coming this far along and having another nomination, I think it’s just as special as the first time,” says Young. “Once you’re nominated for a Grammy, you forever get introduced as a ‘Grammy-nominated artist.’ It’s a big deal.”

The country star also opened up about sharing a special bond with an unlikely fan at a Grammys afterparty in 2011 — and he’s hoping to recreate a similar moment this year (although he’s not a fan of taking selfies with other celebs).

“They were playing all the people who had been nominated, and ‘Getting You Home’ came on. I looked up, and Tony Bennett was in the corner, just nodding along to it,” he says. “I’d love for another moment like that to happen. Something that you completely don’t expect, because every genre, every artist, everybody’s there. It’s just going to be a crazy night.”

In preparation for his red carpet appearance on Sunday, Young has officially settled on an outfit (“A Hugo Boss tux!”) with help from friend and 20-time Grammy award winner Vince Gill, who will attend the show with him. “He’s not my date!” Young insists with a laugh.

“I convinced Vince to go with me, so we’re picking him up from Texas and going straight out there,” he adds. “To have him there and talk about everything going on on the carpet, it’s going to be really awesome.”

The friends, who collaborated on Young’s hit song “Sober Saturday Night,” will fly on the jet to Los Angeles and back on Sunday.

“We’re going to be in this amazing city, we’ll have some fun,” says Young, who admits he’ll probably need to nap on the plane on the way home. “[The Grammys] aren’t just a total work thing … I don’t take the nomination lightly — it’s awesome, but we want to have some fun too!”

After the awards show, Young will focus his attention on his partnership with Folgers, promoting their annual Jingle Contest. The competition calls for budding musicians to submit unique versions of the coffee company’s catchy commercial tune. The winner receives $25,000 and a mentoring session with Young.

“Giving back to people that are wanting to be in the music field in any way, shape or form is really important to me,” he says. “We feature up-and-coming musicians — giving them the chance to, not only get a leg up and get seen more, but to win some money to make music with!”

He adds, “One thing I love seeing in a musician is when they have a story to tell. Songs are stories and when people can really tap into that and tap into their life experiences, things they’ve done, things they want to say … It makes people listen.” 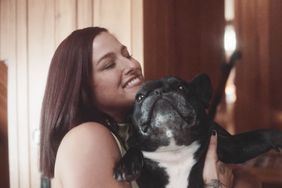 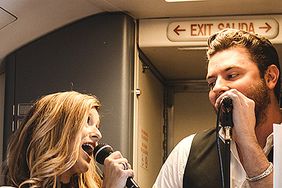