The country legend has "declined quite a bit" cognitively though

Ever since country star Glen Campbell was diagnosed with Alzheimer’s disease in 2011, the singer’s family has been watching his mind deteriorate, but his spirit soar.

“Glen is healthy, content and jovial,” wife Kim Wooden, 55, told PEOPLE at Saturday’s 67th Directors Guild of America Awards in Los Angeles. “Cognitively, he’s declined quite a bit. More and more every day. We just take each day at a time and make the best out of it. It’s a sad illness.”

Despite his disease, Campbell, 78, still has something to celebrate. His original song, “I’m Not Gonna Miss You,” written for his documentary Glen Campbell: I’ll Be Me, nabbed the best country song award at the Grammys on Sunday, and it’s even up for an Oscar.

According to Glen’s wife, it is a combination of his own music and his laughter that has gotten them through each day. “Glen had such a great comedic sense and attitude,” she revealed. “Humor got us through. And music helped him experience joy as long as he could.”

Though Wooden likes to play Campbell’s own music for him to fall asleep to in the Nashville facility where he currently resides, she admits Campbell has not been as responsive as before.

“He’s not responding to his music on a CD player,” commented Wooden. “When our daughter and son come and play live for him, he really lights up. He can tell the difference between live music and not.”

Wooden also revealed that there is a feature film about her husband’s life in the works, though it is in very early stage.

“We thought of Justin Timberlake and Ryan Reynolds,” Wooden said when asked whom she’d like to see play her husband. “Justin obviously is a fabulous singer and musician. And he’s done a lot of acting. He’d be an amazing actor to portray Glen. And it would be the role of a lifetime for him.”

Sounds like the Campbell family may have another trip to the Oscars down the line. 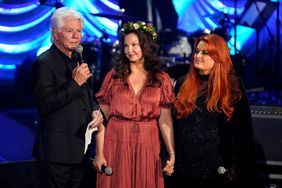 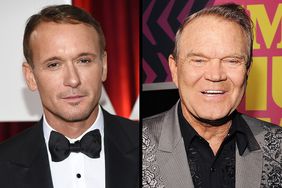