The country music couple — who celebrated their 15-year wedding anniversary in December — guest co-hosted The Ellen DeGeneres Show together on Friday, opening the show by answering audience questions about their relationship secrets. One viewer even asked for their "advice for setting the mood in the bedroom."

"I think, for me, music is the big thing for me to set the mood," said Brooks, 59, while standing beside beside his wife, 56. "And I don't know if you listen to country music, but one of the greatest female voices ever on the planet is this gorgeous blonde named Trisha Yearwood. Yeah. That'll get you in the mood right there."

"You do need the right music," added Yearwood, who then joked, "There is this very sexy singer-songwriter guy who always gets me in the mood. Maybe you've heard of him? His name is John Legend."

Touching her shocked husband on the shoulder, Yearwood assured him, "I'm just kidding. I mean, I do love John Legend. I love listening to you too." Brooks then responded, "You too? You want to clear that one up? Is it the band U2?"

Toward the end of the opening monologue, the couple also shared their secret to a lasting marriage.

"I think you got to treat it like a duet," he said. "You got to harmonize, you got to make your partner feel like they're a star. If not, you're gonna turn into a solo act pretty damn quick, if you know what I mean."

The pair then shared a playful duet filled with some of their best advice, which could be summed up with: "the wife is always right."

RELATED VIDEO: Garth Brooks Says He and Trisha Yearwood Are 'Even Closer' After Working on Marriage amid Quarantine

Yearwood recently opened up to PEOPLE about marrying Brooks in 2005 and figuring out how she fit into the lives of his three daughters, Taylor, August and Allie (with his ex-wife Sandy Mahl).

"I had a dog before I married Garth but no children of my own. I never even really babysat! So I didn't know what to do with three young girls," said Yearwood. "Garth was such a wonderful mentor to me as to how to be a parent, and he told me, 'You'll find your way with each of them. Don't try to be their best friend, and don't try to be their mom.' "

"They let me learn my way and allowed me to be that third parent in their lives. They were a gift that I didn't know I needed," she said. "I didn't know how much children brought into your life until I got a chance to be a part of their lives." 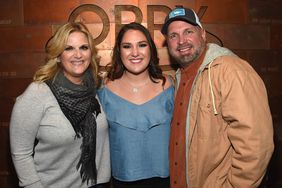