Celebrating her two No. 1s, recent awards and a return to the stage, the new mom can't help but lean into life's goodness: It's "just an overwhelming feeling of thankfulness"

Would the Gabby Barrett of today — oh-so-happily married and blissing out on new motherhood — even be capable of releasing what is now everyone's favorite hater song, "I Hope"?

One of her co-writers, Zachary Kale, asked that question in his remarks at the song's No. 1 party on Wednesday evening in Nashville, and he answered it with assurance: "Absolutely not. I don't think she would at all."

Indeed, Barrett later affirmed Kale's opinion in an interview with PEOPLE. "I'd definitely write 'I Hope' differently, for sure," the 21-year-old hitmaker said.

But how? What would she "hope"?

Barrett mulls the question for a moment. "And then I hope you're ... blessed'?" she submits, before dismissing that idea with a laugh. "I don't know — something less angry!"

There's no doubt Barrett is now much different from the American Idol-pedigreed teenager whose failed high school romance inspired the blockbuster song in a songwriting session three years ago. Yet don't think she regrets all that venom, since it is, after all, the song that launched her career like a space shot.

And don't blame the 21-year-old Barrett for having "blessed" on the brain these days. It's completely understandable, given that's exactly how she feels about her infant daughter, Baylah May, born Jan. 18, her husband of two years, fellow Idol alum Cade Foehner, and her remarkable success story.

In just two short years she's gone from an unsigned artist to a multi-award-winning, multi-platinum-selling star. Only a month ago, she took home the Billboard award for top female country artist, beating out her own Idol mentor, Carrie Underwood, and Maren Morris based on sales, streaming, radio airplay and other industry metrics. Less than three weeks later, Barrett's second consecutive No. 1, "The Good Ones" — also celebrated at the Nashville party — beat out Underwood, Morris (along with Carly Pearce, Kelsea Ballerini, Miranda Lambert and Mickey Guyton) for the fan-voted female video of the year.

Her career accomplishments have been arriving so swiftly, Barrett admits, that she's had trouble taking it all in. "It's hard to look at everything when you're moving at a million miles an hour," she says. "You're not really able to enjoy it — or at least I wasn't able to enjoy it and look at it as much as I could, and let everything sink in that was really happening with my work."

But the quarantine life, she says, finally gave her time to reflect — and to allow herself to fully appreciate what she's done. She reveals she had a moment, just sitting alone in her Nashville home, when everything hit her and she wept.

"I was crying happy tears about what's been happening because I've been working so hard," she explains. "It was just an overwhelming feeling of thankfulness."

The year off the road, of course, wasn't exactly "down time" for Barrett. In that year, she delivered her daughter, as well as her other "baby," debut album Goldmine (which has, appropriately, been certified gold).

So which one was more difficult to give birth to?

Barrett's mind immediately goes to the album, which she was forced to complete amid the hardships of social distancing.

"I was singing voice memos in the car, just singing in parts, because we were just trying to meet all of these deadlines," Barrett recalls. "Everybody was just trying to help make it as perfect and as great as I wanted it to be."

But what about the real baby?

"Actually, giving birth was fairly easy," she says, "so I'm glad about that!"

So far, Barrett says, the hardest part about motherhood is "probably being tired all the time and not getting enough sleep. I can see how it really just wears on you mentally and physically and how important sleep is. But I'm still able to find joy in the tiredness, which is really nice."

The best part of her new role, she says, is "getting to see your genetics and your DNA come to life in front of you, combined with the person that you're in love with. You know, the child was made from love. Children are a blessing."

Baylah's sweet temperament, she adds, has been a blessing on top of that, making Barrett's transition back to the touring life easier than she'd anticipated.

"I'm in the thick of finding that balance between being a mom and being an entertainer, and it's actually going really well because Baylah is a very good baby," she says. "She sleeps through the night now. She doesn't have any crying fits. She's very content, and that's another blessing that I have to point back to the Lord for."

Barrett takes obvious pride in the fact that she's resisted hiring help for the baby — "I'm a very hands-on mom" — and giving credit to her husband for pitching in (and continuing to live up to what inspired her to co-write "The Good Ones").

But childcare is changing now that the couple is hitting the road. As his wife's guitarist, Foehner is by her side on stage, so they're bringing along a nanny as Barrett plays festivals and, in August, joins Thomas Rhett's "Center Point Road" Tour.

"I'm not trying to put her down for a nap and then go do a show real quick!" she says with a laugh.

Then she turns serious: "Motherhood is very important to me. I knew from a very young age that I always wanted to be a mom and have babies and raise kids. So to have her, it's just been so sweet."

And she doesn't hesitate to add: "I've been very blessed."

For this grateful wife, mom, and new country star, it's one thing that can't be said too much. 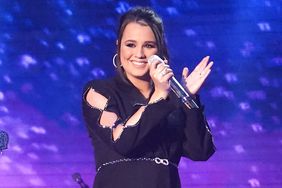