The country artist, 31, proposed to his girlfriend of three years Paige Korte during Memorial Day weekend in May, PEOPLE exclusively reveals.

"I've written so many songs about love and finding 'the one' that when it actually happened, I couldn't believe it," Filmore tells PEOPLE about his engagement to Korte, a 26-year-old cardiac sonographer at St. Thomas Hospital in Nashville.

"I'm excited to share my whole life with her from days at home on the couch to life on the road. I'm beyond thankful to have found my person!" he says.

The couple met at a Tin Roof restaurant in Columbia, South Carolina, and had a long-distance relationship for a year before Korte moved to Nashville, where the pair now live together with their two dogs Wrangler and Nala.

In the proposal video, shared on Filmore's YouTube page, the "Slower" singer gives a heartfelt speech while on bended knee.

"Paige, I loved you ever since the moment I met you. I knew I was going to spend forever with you. I had written this down a million times but it's completely lost on me at the moment. I can't imagine spending my life with anybody else other than you," he says. "You're the most special human, beautiful inside and out that I've ever met. If the last three years were any sign of the rest of my life, I can't wait to spend it with you. Will you make me the happiest man in the world?"

Prior to the proposal, Filmore shared an original unreleased song that he wrote for his bride-to-be called "We'll Be," which was written with Mitchell Tenpenny and Michael Whitworth.

Along with his hit 2018 single "Slower," Filmore released "Other Girl" and was the opening act on Lauren Alaina's That Girl Was Me Tour earlier this year. 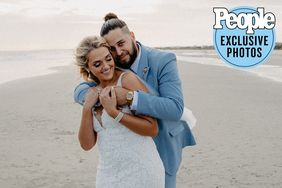