Rev Your Engines! Behind the Scenes at Dierks Bentley's Celebrity Motorcycle Ride

The singer rallies his famous friends to help raise money – more than $330,000! – for a great cause

Aww! Country star Dierks Bentley gets a little support from 11-month-old son Knox at his 9th Annual Miles amp Music for Kids celebrity motorcycle ride and all-star concert on Sept. 28 in Nashville. "I definitely want [my kids] to understand the importance of giving back," Bentley told PEOPLE of Knox and daughters Evalyn, 5½, and Jordan, 3½. "I hope that this is one of those things that they'll look back on and think, 'This is something really cool that my dad did.'"

Bentley (with mom Cathy on the back of his bike) leads more than 1,500 riders on an hour-long trek to Riverfront Park – and raises a whopping $335,479 in the process, a record for Miles amp Music. The money goes to the Monroe Carell Jr. Children's Hospital at Vanderbilt University Medical Center.

"I almost dropped her – true story!" the singer said of his ride with mom Cathy. "I hadn't ridden this bike in a while and I'm not used to having someone behind me. I was waving to a bunch of folks as we were leaving and I kind of goosed it. She had a light grip on me and I felt her scoot off behind me. I was about an inch away from my 70-year-old mom flying off the back of my bike!"

Bentley thanks the nearly 7,500 concert attendees who turned out to see the night's entertainment, which included pals Chris Young, Randy Houser, Kip Moore and Jon Pardi.

"Like a Cowboy" singer Houser flew in just in time to perform – and apologized to Bentley for missing the ride.

Bentley's daughters Evalyn (left) and Jordan (right), along with their friend Shyla Stewart (daughter of Nashville songwriter Jessi Alexander), dance along as Dad kicks off his Miles amp Music set.

Bentley calls his band – and Esten! – over for a quick pow-wow before taking the stage to perform.

Moore reflects on the day's fun on Twitter. "Tryin to figure out how to do some more shows together," he wrote, to the delight of fans.

Hi guys! Bentley shares a few laughs with his TV star pal Esten before his set. 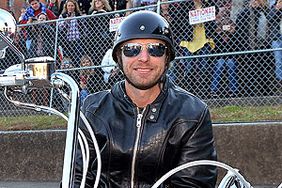 Dierks Bentley is 'Flocking' Nashville with Birds – for a Good Cause 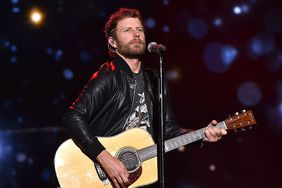 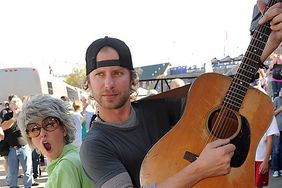 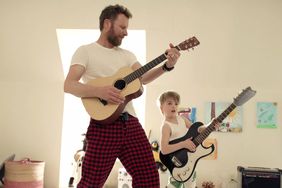 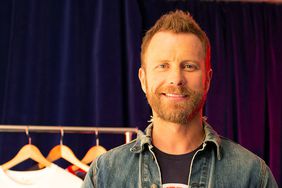 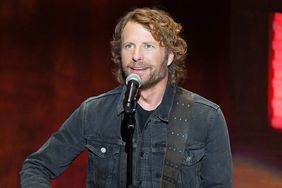 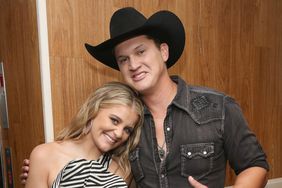