The emotional song will appear on The Shack soundtrack, due Feb. 24

Dan + Shay wrote a tear-jerker for the upcoming The Shack soundtrack, and PEOPLE has an exclusive first look at the music video.

In the clip, the country duo — Dan Smyers and Shay Mooney — are seen performing their new track “When I Pray for You” in a forest, in between scenes from the upcoming spiritual movie, which stars Octavia Spencer and Sam Worthington.

Written from the perspective of a soon-to-be father, the emotional song is especially meaningful for Mooney, 25, who welcomed son Asher James with fiancée Hannah Billingsley last month.

Among the track’s pull-at-your heartstrings lyrics? “I talked to God about you / And I ain’t even met you yet / Everybody’s waitin’ on you here / I can’t wait to feel your heartbeat when I lay you on my chest / I’m already holding back my tears / I want to be the dad that my dad was / I hope that I don’t mess this whole thing up.”

Smyers opened up about “When I Pray for You,” telling PEOPLE in an exclusive statement: “It was an honor to have a song that means so much to us featured in a movie as powerful as The Shack. We were able to blend beautiful scenes from the movie with epic performance shots we filmed in Tennessee. This is our first time being a part of a soundtrack, and to make a music video for it was icing on the cake!” 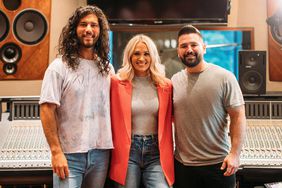