Lucky Number Seven! Cole Swindell Reflects on His No. 1 Singles — and Shares the Stories Behind Them

It’s been a busy year for Cole Swindell. But between touring with Dierks Bentley and playing headlining club shows across the country, the country singer, 34, is showing no signs of slowing down. Every year since 2014, Swindell and his team have released a Down Home Sessions EP with a batch of new songs for his devoted fan base. For Down Home Sessions IV, out Nov. 24, Swindell decided to mix things up.

“We did a stripped-down, acoustic session of songs I’ve written for other people. So it’s my versions of Luke Bryan’s ‘Roller Coaster,’ Florida Georgia Line’s ‘This Is How We Roll,’ Thomas Rhett’s ‘Get Me Some of That,’ and others,” he tells PEOPLE exclusively. “I think it’s going to be cool to have songs that I’ve written for other artists that were big songs for me as a songwriter.” Certainly, it’s a fitting release for someone whose career started as a songwriter — and an opportunity for Swindell to give fans his interpretations of the songs he penned.

To celebrate his upcoming release, and Swindell’s lucky seven streak of achieving seven No. 1 hits, we caught up with the singer-songwriter to reflect on each of his chart-topping singles.

“Let Me See Ya Girl”

The fourth single from Swindell’s 2014 debut album is a breezy homage to the thrill of an unexpected tryst (“this night’s been waiting on us”). It’s the kind of pop-infused jam that makes for the perfect alarm clock track–thrumming bass notes, a catchy chorus, and just enough of a reminder of the previous night’s magic to lull you from sleep. “I wrote that one with Michael Carter and Jody Stevens. It was just a fun song. A lot of my buddies back home have so many of my songs, the good and the bad ones. I remember them saying, ‘Everybody keeps singing “Let Me See Ya Girl.”‘ ‘We’re telling you this song is a hit,’ they would say. They kept saying it, so it ended up going on the album. But the crazy thing is XM radio played ‘Chillin It,’ which became the song that broke me out. But ‘Let Me See Ya Girl’ was supposed to be that song, before I switched it up at the last-minute. It was almost my first single,” Swindell says, his kind Southern drawl trailing off to a whisper.

Written with Shane Minor, the slick studio cut features Swindell’s signature lighthearted swagger, reminiscent of Luke Bryan’s 2013 Crash My Party era (when Swindell moved to Nashville, he got his start as Bryan’s merch guy). At the time, Swindell had already penned Bryan’s “Roller Coaster” and Rhett’s “Get Me Some of That,” and was ready to make the transition from songwriter to an artist in his own right. “I wanted to get a record deal. It’s the reason I moved to town. ‘This is the song has to be my first single,’ I remember thinking. It just makes you want to roll your windows down and sing along. As a new artist, you’re just trying to get people’s attention,” Swindell recalls. “You have to have a song that’s a little different that puts you out there, and I thought ‘Chillin’ It’ was the perfect one.”

In 2014, as David Letterman’s tenure on CBS neared its end, Swindell journeyed to the famed Late Show stage for his first live television performance. “It was the day my first album came out. I remember before I went on stage to sing, you have your in-ear monitors and [microphone] pack. And I had left my pack upstairs. These gigs are very time-sensitive and I reached back to feel my pack and I realized, ‘Oh my God, I don’t have it’. So my manager Kerri [Edwards] sprints up there and comes back down with about 30 seconds to spare. I plug it in, and they just push me out there—like you see a movie. It was one of those moments where I said, ‘Either you’re nervous, or you just gotta do it.’ That was my first taste of television.”

“Hope You Get Lonely Tonight”

The follow-up to “Chillin’ it,” the nostalgia-laced anthem is a bittersweet ode to the mental gulf between thinking you’ve moved on from an ex, and actually doing so. Co-written with Michael Carter and Florida Georgia Line’s Brian Kelley and Tyler Hubbard before Swindell had his record deal, the singer assumed Florida Georgia Line would record it. “I didn’t know that I was about to get a record deal and we wound up with it. It was always one of my favorites. It’s not [hoping you get lonely] in a mean way, it’s hoping someone misses you like you miss them,” comments Swindell, of the song’s sentiment, which hits close to home for many listeners.

“Ain’t Worth the Whiskey”

A highlight at Swindell’s live show and another hymn for the brokenhearted, Swindell snaps the dejected into an empowered state of mind, shot in hand. “I wrote this song six years ago with Adam Sanders and Josh Martin. We wanted everybody in the world to record it and it kept getting [rejected]. I learned one of my biggest lessons from this, that everything is going to work out how it’s supposed to,” admits Swindell. “We prayed that thing would get recorded by somebody and it ended up being my third single and one of my biggest songs to date.”

The song’s beautifully produced music video also pays tribute to our servicemen and women, with Swindell’s personal friend and veteran Army Ranger Kyle Davis making a cameo. “[Davis] did five tours overseas, and I got to have him and some of his team members in the video. We got to thank him for keeping us all safe and all the men and women who sacrifice for us to be able to do what we love and do it safely,” shares Swindell. “Hearing my friend say that he and all his team members used to listen to the song when they’re off fighting a war, that’s hard to comprehend. The video is one of the most special I’ve ever shot because of that.”

“Middle of a Memory”

Swindell wrote what would become the second single off of his sophomore album You Should Be Here alongside Ashley Gorley, and Zach Crowell. “There’s a song on one of my EPs called ‘Kiss.’ I remember when we were writing ‘Kiss,’ there’s a line in the second verse that says, ‘Girl, you left me here with half a beer in the middle of a memory.’ We stopped in that moment and everybody looked at each other, like ‘Wow, “Middle of a Memory” — that could be a whole other song.’ We started ‘Middle of a Memory’ before we ever finished the other song,” Swindell concedes. While the title may hint at a sad song, Swindell doesn’t see it that way. “It’s one of those what coulda, shoulda been songs. It’s not a heartbreak song. You meet someone, you’re into them and the night doesn’t end how you hope.”

A flirty nod to a night on the town, Swindell enlists friend and 2017 tourmate Bentley for supporting vocals on this fast-tempo track. “[Bentley], Eric Church, and Luke Bryan are the guys that made me want to write songs. I wrote ‘Flatliner’ way before I had my record deal [with Jaron Boyer and Matt Bronleewe ] and we tried to get it to Dierks. I don’t know if he ever heard it but years later he became a fan of ‘Chillin’ It’ and we were texting back and forth. I told him, ‘I wrote a song with you in mind a couple years ago,’ and he said, ‘Well, send it to me,’” says Swindell. Bentley loved the song and the two had a running joke that they had to lay down the track already. “Sure enough, when it came time to record it, he was a part of it. It’s not every day you go from admiring somebody’s work to being on tour with them and singing the song every night.”

To this day, one of Swindell’s favorite studio memories is recording the song with Bentley, where the two riffed off of each other to come up with some pretty ridiculous ad libs. “We couldn’t put half the stuff we said in there!” (He admits “Does she have a sister?” is a favorite joke that landed on the cutting room floor.)

“You Should Be Here”

Easily the most poignant song in Swindell’s catalogue, his sophomore album’s title track manages to be both incredibly personal and yet universal. Written by Swindell and Ashley Gorley, the song is a tribute to Swindell’s father who died suddenly in 2013. “It’s obviously my favorite song I’ve ever written and it may stay that way forever. I lost my dad in a freak accident four years ago, and this was the first song I had ever written about that. I’d always heard, ‘Songwriting is like therapy for people’ but I’d never heard that or lived that. But then I was put in a situation [where doing so] would not only help me with the healing process but help others,” shares Swindell.

“It was 2014 and I was on tour with Luke Bryan. We were at Gillette Stadium [in Foxborough, Massachusetts] and Ashley Gorley was out with me that weekend. He walked inside to take a picture since we were in a football stadium and sent it to his daughter and said, ‘You should be here.’” For Gorley, it was one of those moments where he figured his daughter would freak out that he was in a football stadium. He told Swindell the story and when he said the ‘You should be here’ line, it immediately struck a chord with the musician. “All I could think about was my dad. It didn’t take very long to write–it probably took an hour and a half–it’s one of those few songs I’ve ever written where I had chill bumps the entire time.”

Of course, there are countless songs about losing someone you love. For Swindell, the straightforward tune represented something more though. “It’s about the moments. Anybody in real life can relate to it. I knew I wanted to help other people who have been through what I’ve been to,” Swindell says. “People always ask, ‘How do you get through performing that song?’ and to me, I know there are people out there who need to hear it. I’m looking out there and wondering who their tears are for and who they’re thinking about. I know who I’m thinking about. If my dad had known that leaving the world a little early would have inspired me to write a song that helped so many, he would have been cool with that.” 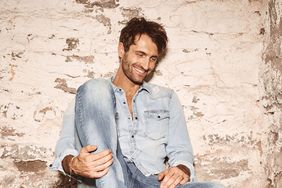