Both country singers cited personal reasons for pulling out of this year's CMT Music Awards, sharing posts on social media

Maren Morris and Gabby Barrett will no longer be performing at the 2021 CMT Music Awards.

On Tuesday, both country stars announced that they would be pulling out of the awards show, set to air on Wednesday, citing scheduling conflicts and personal reasons.

According to Billboard, the scheduled performances at the country music awards show in Nashville have been altered ahead of the singers' absence. Ingrid Andress will now take the stage with JP Saxe to perform "Line by Line," while Lindsey Ell will perform alongside Lady A and Carly Pearce.

Sharing the news on Instagram, Barrett posted a photo from her performance at last year's CMT Awards, reminiscing on the show and her breakthrough video of the year award win for "I Hope."

"Still thinking back to last year's CMT Music Awards performance and my very first award win 😍 Such a special moment that I will never forget," the 21-year-old singer wrote of the moment.

"I'm really sad to share that because of personal circumstances I won't be able to perform with @ladya and @carlypearce on Wednesday at the @cmt Music Awards!" she continued. "I'll be rooting for you guys and all of the incredibly talented nominees and performers! So appreciate all of your support and will see yall on the road this summer :)."

"Due to a scheduling conflict, I will not be performing at the CMT Music Awards on Wednesday," said "The Bones" singer. "I know @jpsaxe will slay it and I am so excited for his album to come out soon!"

Though they won't be able to make it to this year's ceremony, both artists are nominated for the CMT's female video of the year — Morris for "To Hell & Back" and Barrett for "The Good Ones." 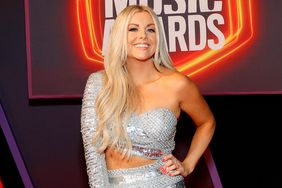 Lindsay Ell Reveals She Injured Her Foot While 'Chasing After' Her Dog: 'I Broke It Pretty Good'