From the stage to the aisle, the boys of country music trio Midland never stray far from each other’s sides.

During their PEOPLE interview on the red carpet of the 2019 CMT Awards on Wednesday night, lead vocalist Mark Wystrach — who got engaged to girlfriend Ty Haney in May — popped a different kind of question to his bandmates, guitarist Jess Carson and bass guitarist Cameron Duddy.

Getting down on one knee, Wystrach asked, “Jess, Cameron, would you guys officially be in my wedding? Be my groomsmen? And also be my bitches that will do everything that I ask because I will be a groomzilla? It’s my wedding.”

Their answer? A resounding “Yes!”

Taking it a step further, Duddy said without prompting, “Yes, I’ll be your best man.”

“That’s how it happens too,” Carson said. “I asked Cameron to be in my wedding and he goes, ‘Obviously I’m your best man.'”

Wystrach added: “And Jess is so nice he had to call his f—ing best friend and be like, ‘Dude, I’m so sorry.'”

While Wystrach and Haney haven’t set a date yet, he said they’re looking to have the wedding within the next year and a half at his family’s ranch. When asked if they’ve started planning, Wystrach replied, “We have.”

“Cameron and Jess are also moonlighting — talk about busy — this is what I’m talking about,” he joked. “They’re planning my wedding right now. They decided to have it in 2028.”

Wystrach announced his engagement on Twitter back in May with a sweet slideshow of photos of his bride-to-be and her beautiful ring.

“Popped THE QUESTION and @ty_haney had the answer I was lookin’ for !!!❤️💍 🌈 ⚡️ ❤️,” he wrote on Instagram alongside the pictures, which feature Haney cuddling the couple’s two dogs, Juice and Pony, in Boulder, Colorado.

“It kind of was unplanned and just unfolded naturally when we were barefooted and on a walk with our little puppies,” he told PEOPLE at the time. “It was right after a big thunderstorm, and the sun just popped [up] out of nowhere, and I knew it was a sign.”

On the CMT Awards carpet, Wystrach added of the engagement, “Well, it shocked the hell out of me because she got down on a knee and she proposed to me. Look at the bling, there it is. It’s a lot of diamonds. Ladies, she set a new precedent. She asked me, that’s right. I was holding out for a diamond, and that’s what daddy got.”

Be sure to follow PEOPLE’s full CMT Awards coverage to get the latest news on country’s big night.

“Camille is the strongest woman I know,” Carson told PEOPLE at the time. “She wanted to do a home birth and she did it 100 percent natural — I’m still just awestruck by her.”

The couple are also parents to son Parker Emmanuel, 2, and daughter Ida Mae, 3.

Carson explained the meaning behind the name of their new baby, saying, “Rosalia was Camille’s great-grandmother who came from Italy on a boat when she was 16 and spoke no English. Jean is after my father, whose name is Eugene but everyone calls him ‘Gene’.”

Aside from the whirlwind that has been their personal lives and the release of their new single, “Mr. Lonely,” the band has been hard at work on their new album, Let It Roll, coming out on Aug. 23.

The 2019 CMT Awards are airing live from Nashville’s Bridgestone Arena at 8 p.m. EDT Wednesday on CMT. 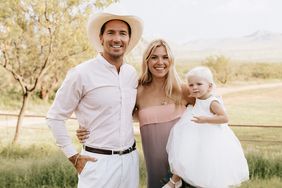 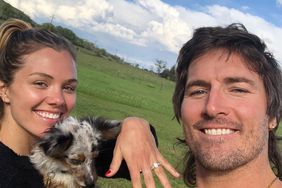 Midland's Mark Wystrach Engaged to Girlfriend Ty Haney: 'I Knew I Was Going to Marry Her'