The CMA Awards, hosted by Luke Bryan, will broadcast live from Nashville on Wednesday at 8 p.m. ET on ABC.

The 55th annual CMA Awards announced a third round of artists set to appear at this year's show on Thursday, bringing the grand total to a whopping 20 performances.

Bryan will perform his new single "Up," while Thomas Rhett, who is nominated for male vocalist of the year, will sing "Country Again."

"Can't wait to return to the #CMAawards stage next Wednesday night!!" he wrote on Twitter.

The twice-nominated Bentley will sing "Beers on Me" with a little help from BRELAND and HARDY, while Hudson, a Grammy, Emmy and Oscar winner, will make her debut on the CMA Awards stage.

Zac Brown Band, who are nominated for vocal group of the year, will perform "Same Boat."

For the first time since Vince Gill did so in 2003, the show will welcome a solo host in Bryan, who said he thought long and hard about accepting the gig.

"The pressure that comes along with that can be overwhelming, but knowing I get to help honor and celebrate so many of my friends, I knew it was something I couldn't turn down," he said in a statement.

The CMA Awards, the longest-running annual music awards program in network television, will broadcast live from Nashville on Wednesday at 8 p.m. ET on ABC. 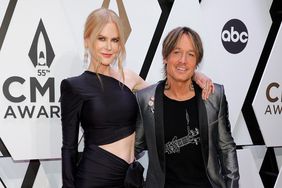