"I swear I just came here to unwind and have one drink," the country star tweeted, quoting from her song

She's coming after all!

Country queen Kelsea Ballerini will be hitting the stage tonight at the 2020 CMA Awards to perform her track "hole in the bottle."

"I swear I just came here to unwind and have one drink 😉🍷," the 27-year-old tweeted about her performance, quoting lyrics from the song she'll perform.

Ballerini wasn't originally set to attend the awards show. In September, she vocalized her disappointment with being left off the nominations list after releasing self-titled album kelsea earlier this year.

"Putting out an album and working as hard as I can, even through a pandemic, I just felt disappointed to not be a part of a community that I work really hard to stand up for and be a face of and make music that I really do hope represents the genre well," Ballerini told PEOPLE of the snub in September. "I just felt disappointed, and that's okay. That'll make me make a better record next time."

"Not that awards don't matter, because I really do think they do, and I think that's why I'm disappointed," she added then. "Honestly, it helped me refocus on what matters to me, and that truly is making the best music that I love and that I feel good about and making it for people that will show up for me in seats when I'm able to go back on tour."

After the nominations list was announced, she took to Twitter to say she was going to use the snub as motivation.

"Last time this happened, I wrote homecoming queen the next day about the feeling," the 26-year-old tweeted, referring to kelsea's lead single, which she wrote after being snubbed at the ACM Awards last year. "Something beautiful will undoubtedly come from the current disappointment."

The announcement also comes days after posting references to Shania Twain on her Instagram recreating some of the country legend's looks. She also posted a recent TikTok with Twain featuring "Man! I Feel Like a Woman."

"let’s go, @shaniatwain 😉🍷," she tweeted, teasing a possible collaboration. (She used the same emojis in her tweet about the CMAs performance.) Twain shared the same TikTok and a similar caption.

The 54th Annual CMA Awards will air Wednesday at 8 p.m. EST on ABC. 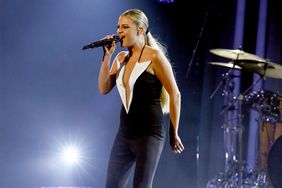