The country superstar and his actress-singer wife are still making beautiful music together — and getting ready to head out on their first-ever joint tour. "It's a new chapter," says Clint

They were two stars in separate orbits, so much so that Clint Black didn't even know who Lisa Hartman was when they met backstage on New Year's Eve 1990 after one of his concerts.

About to celebrate their 30th wedding anniversary on Oct. 20, the couple vividly recall the moment.

"It was slow motion, like you see in the movies," Lisa, 65, tells PEOPLE in this week's issue. "There was something there."

Says Clint, 59: "I knew I was looking at somebody amazing. I didn't know anything about her. I didn't know her TV show. I just looked at her eyes and I was just, wow!"

At the time a principal on the hit TV drama Knots Landing, Lisa was in town promoting a TV movie when she snagged a show ticket from a mutual friend. Days later, another mutual friend pressed Lisa's phone number into Clint's hand, and he took it from there. Ten months later, they married in a family-only wedding on his Texas farm.

Before Brad and Kimberly, and before Keith and Nicole, Clint and Lisa are perhaps the original Nashville-Hollywood couple to captivate fans. When their dating news broke, it seemed to be an improbable pairing, but it has since turned into an enduring and enviable marriage.

"Love is something that you nurture and protect," says Clint. "We've grown together in our relationship and never apart."

Calling his wife the "biggest influence" in his life, Clint also has relied on their relationship to inspire some of country music's most timeless love songs. "Once we fell in love," he says, "then any love song I wrote had to ring true to who we are."

But Lisa has been far more than her husband's muse. Over the years, she's joined him on several memorable duets, including their blockbuster "When I Said I Do" in 1999, and she's made occasional guest appearances in his shows. Last year, the couple performed as Snow Owls on The Masked Singer, and next month, just weeks after celebrating their milestone anniversary, they'll be setting out on tour for the first time together.

Back in 1990, Clint didn't know he was meeting a singer, as well as an actress. Through the 1970s and mid-1980s, Lisa recorded four pop-rock albums, though without a breakout hit. After they married, she decided to shelve that part of her life and keep her singing to their private duets at home.

"His career was so huge," she says, "and I had done my thing, and I just pretty much let it go."

But over the years, Clint has refused to let his wife's considerable vocal gifts stay hidden. He relishes the story of how he first got her back to the studio with "When I Said I Do." The song was written over two days, while he stood at the kitchen island of their Nashville home as she worked nearby.

"I go, 'Sing this with me,' because she would sing harmony with me on my favorite songs around the kitchen," he recalls. "So after two days we're singing this song, and she sounds great, and then I told her, 'You're going to have to record that with me."

Her response, Clint recalls, was swift. "I'm not going to record that song," she said, adding that he needed to find "a real singer."

Why'd she say no?

Clint persisted, and mere days before he had to turn in the entire album that the cut was destined for, he came up with a closing argument: "I said, 'If you don't sing on this, I'm gonna sing it by myself, not getting anyone else to sing it with me, and we'll always look back and wish you were there.'"

Lisa finally agreed he'd made his case, and she headed to the studio. "When I Said I Do" went on to become one of Clint's 13 No. 1 songs, and it earned the couple an ACM award for vocal event of the year in 2000.

Most recently, their foray on The Masked Singer gave Lisa yet another opportunity to show off her voice — and their chemistry.

The invitation arrived via text while, fatefully, Clint was standing at that same kitchen island. "I looked up at Lisa and I said, 'Well, listen to this,'" he recalls. "We just laughed at the idea of it, and then we looked at each other and we knew that we were actually going to think about doing it. And it took about five minutes of talking about it seriously and then we were in. It was that fast."

Lisa says the experience brought them even closer. "We had never done anything like this," she says, "so we really leaned on each other."

It also inspired Clint to write another duet, "Til the End of Time," released last December, and it helped pave the way for their 24-date tour, which launches Nov. 18 in Wichita Falls, Texas, and finishes in New Orleans on Valentine's Day 2022. Cleverly titled "Mostly Hits & the Mrs.," it also will feature the couple's 20-year-old daughter, Lily Pearl, an aspiring country artist.

"It's something completely new," says Lisa, and she confesses, "I'm going to be terrified." But, she says, she trusts those jitters will ease once she gets through the first show.

The couple promise an evening of entertainment packed with memorable solo, duet and trio moments. Lisa also has talked her husband into performing "a huge hit" that he hasn't done in concert in 25 years. "I'm not going to give it away!" she teases.

"And then I've talked her into doing something from Knots Landing," Clint reveals.

As it should be, says Clint. Intent on living their best lives as they enter a new decade of marriage, he says the best way to do that is to "keep creating something out in front of us that we have to be ready for and go do and enjoy. Doing this tour is a new chapter. It's challenging, exciting, fun."

For more on Clint Black and Lisa Hartman Black pick up this week's issue of PEOPLE on newsstands Friday.

At Home with Clint 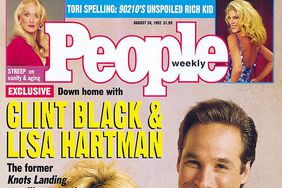