Charlie Worsham Celebrates His Love for His Wife and Son on EP: Music 'Isn't Everything That I Am'

Still hungry for a No. 1 hit, the master multi-instrumentalist has worked through his frustrations and now finds joy in all the "miracles" in his life — especially the little boy he's singing to

Charlie Worsham still doesn't have that No. 1 hit that he's hungry for, but there's no need to console one of the most in-demand guys in Nashville.

In recent years, the multi-instrumentalist has been booked up to lay down his master licks on the recordings of Dierks Bentley, Eric Church, Luke Combs, Keith Urban, Carrie Underwood and Kacey Musgraves, among others. He's toured with his idol, Vince Gill, as well as the celebrated Americana string band Old Crow Medicine Show. And in 2019, he lived the dream of any six-stringer, joining Gill and fellow guitar god, the Eagles' Joe Walsh, to play — as Worsham says euphorically — "Rocky Mountain-damn-Way" at a Crossroads Guitar Festival.

"You don't get to do that necessarily if you're the big star," the 35-year-old Mississippi native tells PEOPLE. "And playing on all those other records, I've learned something every time that further informs me as an artist. And so," he adds, philosophic, "I'm better prepared to receive the miracle."

"The miracle," of course, is the major solo career that all of Nashville has been wanting for Worsham since he made small but critically acclaimed splashes with his 2013 debut album Rubberband and his second album, 2017's Beginning of Things.

His latest project, Sugarcane, a six-song EP out on Friday, offers promise that he'll get an even bigger splash. No doubt a lot of that is due to what Worsham considers the "other miracles" in his life: his wife, Kristen, the Nashville nonprofit administrator he married in 2018, and their son, Gabriel, who was born April 1.

If anything, Worsham's home life has given him a whole new perspective on his career: "As much as I love music, as much as it is such a part of who I am, it isn't everything that I am."

It is, however, now in full service to him as he uses his songwriting skills to express these new parts of himself. Title track "Sugarcane" shows his playful side, inspired by his honeymoon in Costa Rica, where he found a romantic metaphor in the fresh sugarcane juice that he and his bride sipped.

"Sitting on the couch with her the week after the honeymoon," Worsham recalls, "I was just trying to write a song that could make her turn and look at me and think I was sexy or make her laugh. As long as I get a laugh out of her or smile or that look, mission accomplished!"

Another song, "Half Drunk," documents the thrilling and risky moment when he first told Kristen he loved her. "At the time we'd only been dating less than six months," Worsham explains, "but she was already working her magic in my life in that I was starting to see a bigger picture than just music. It was such a refreshing thing to have something else to invest in, and what that did for my writing was I started writing for her."

Perhaps the most tender track on the EP, "Believe in Love," is the unguarded confession of a reformed cynic: "You make me believe in love / You give me reason to trust / that there's a happy ever after."

Worsham says the song actually evolved as a counterpoint to "Fist Through This Town," another EP track that hints at his dark — and bitter — days before he met his wife.

His lowest point, he says, arrived in 2014: Out on tour with Kip Moore, supporting an album that wasn't gaining much traction, Worsham played a 45-minute set after Sam Hunt's 15 minutes — at a time when Hunt's career was exploding. As Worsham walked on stage, he had to endure disappointed fans hollering for Hunt to return.

Over time, and with a lifeline from Porter's Call, a free counseling service for Nashville artists, Worsham says he was able to see that instant stardom maybe isn't all it's cracked up to be.

"How would it have felt for me if I was the one blowing up and people chanting my name every night as I walked off stage and I'd only had 15 minutes?" Worsham says. "That could not have been an easy chapter for Sam, either. ... So, that was actually a gift. That season was a gift wrapped in challenging wrapping paper."

His wife, he says, has also given him a hand in dealing with his emotions. "She helped me realize a lot of my anger and frustration was really sadness and fear — fear that I wasn't going to get to have a seat at this music table," he says. "Fear is valuable, and anger is valuable, but neither one should be driving our car in our life road trip.'

Worsham says he's gained other lessons from the roster of hitmakers who've called on his skills. Perhaps what he's learned most is that there's no such thing as "enough number ones."

Knowing that, says Worsham, helps keep his own drive strong: "My career goal is to always be content with the hunger. That's my definition of success. I know that hunger will never go away, and I don't want it to go away."

Worsham got to see that lesson in action in early 2020 when he was among the select group of musicians who joined Eric Church in his sleepless 28-songs-in-28-days session of writing and recording — the marathon that fed Church's latest triple album, Heart & Soul.

"He wanted to be pushed into a corner," Worsham says of Church, "because when we are fighting our way out of a corner is when we're at our best."

Perhaps Worsham's strongest testament to his career attitude is "For the Love," an EP track with a rollicking Southern rock vibe: "If I was in it for the fame / you'd already know my name / But I've only ever been in it for the love."

He says he fell in love with music as a little boy when he watched his buttoned-up banker dad let loose on drums in a weekend band. "When the band came over to practice at our house," he remembers, "I saw in adults the play that I saw in my buddies as a kid, and it clicked in my head: Whatever they're doing right now is a way for grownups to be like kids. I want to do that."

Worsham says his first memory of music "was sitting in my dad's lap at that drum kit." And now those same drums are in his home, waiting for Worsham to make new memories with his son.

Worsham actually began working on Gabriel's musical appreciation in utero, singing Willie Nelson's gentle ballad "I'll Love You All Over the World" to Kristen's baby bump almost every day. "And I sing it to him now," he says. "Technically, maybe he's too young, but I think he knows what it is."

Gabriel also has already been introduced to a striking black-and-white painting of R&B icon Mavis Staples, which the Brothers Osborne's John Osborne painted and gave to Worsham. (The two were bandmates before both struck out on their current pursuits.) Especially in Gabriel's first weeks, Worsham was bringing him to the painting daily to tell him, "That's Mavis."

Still, Worsham says, he's been learning from his son far more than he's been teaching him. "He just sees everything so pure," Worsham says about the 3-and-a-half-month-old baby. "When the light comes in through the windows in the morning, it's like a miracle, and he's so happy. He's just smiling about it, and I'm like, I should be that way."

The man who's devoted his entire life to music now says he's convicted that "raising babies is the most important thing we'll do" — so much so that he added that line to the lyrics of "Believe in Love."

He's putting his money where his mouth is, occasionally saying no to work because he has that more important thing to do. "It's just like, man, I got a bath to give and a conversation to have with this magic little creature fresh out of heaven," he says. "So yeah, it's blown everything wide open."

And maybe, Worsham intimates, having a chart-topper isn't the goal that it once was.

"Of course," he says, "Gabriel is bigger than any hit song." 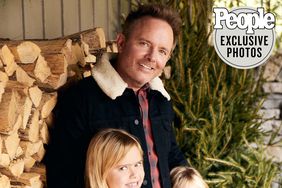 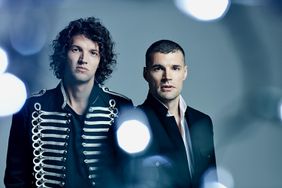 Bring on the Pa-Rum-Pum-Pum-Pums! For King & Country Carries on Love Affair with Much-Loathed Classic 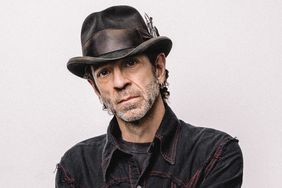