A couple for five years, the singer and the radio promoter finally take the next step as each plans an over-the-top event to pop the question: "I guess this would be the time to ask, will you be my wife?"

Country artist Brooke Eden and her girlfriend of five years, Hilary Hoover, have doubled down on their long-anticipated engagement after each popped the question in separate marriage proposals nine days apart.

Adds Hoover, a 31-year-old radio promoter: "So I guess that was represented in our proposals, as well."

And somehow the "Got No Choice" singer and Hoover managed to pull off dual surprises.

The two women met when Hoover, now a part of Garth Brooks' organization, was working at Eden's record label; since Eden's very public coming-out over the past year and a half, they've been looking forward to finally having a formal engagement.

Out and Proud, Brooke Eden Is Singing About the 'Love of My Life' in New Singles: 'This Is My Girl'

But who would take the first step?

"I told her that I was going to make her go first," says Hoover. "Then about two or three months ago, I looked at her, and I was like, 'I can tell you're ready any time.' And she's like, 'I am.' And I'm like, 'Okay, then all bets are off. The order can be whatever it's gonna be.'"

Hoover, it turns out, got to go first, awakening Eden in their Nashville home on May 13, a Thursday, with a greeting card telling her they were about to fly off for a surprise getaway.

Eden remembers toying with Hoover: "Am I going to be a fiancée this weekend?"

Says Hoover: "I didn't say those exact words — 'I'm proposing to you today' — but I was kind of like, yes, today's the day."

The greeting cards kept coming each step of their journey as Hoover opted for written words to express her feelings and build the anticipation. With ticket in hand at the airport, Eden figured out they were headed to Sedona, Arizona, one of their favorite vacation spots. Hours later, they landed in nearby Phoenix — but the luggage with all of the proposal-worthy clothes that Hoover had packed for the couple, unfortunately, didn't make the trip.

Hoover laughs about it now: "If everything doesn't go the way it's supposed to, come on! That's how the proposal was supposed to go, right?"

The resort saved the day by upgrading the couple to an accommodation with a private pool, inspiring Hoover to improvise. At sunset, the two women pulled on their swimsuits, which they'd stuffed in their carry-ons, and Hoover headed to the water with one more greeting card. Eden opened it once she'd entered the pool.

She recalls Hoover's final sweet written words: "I've been giving you cards all day long because I knew I wouldn't have the words to say, so I guess this would be the time to ask, will you be my wife?"

Hoover, now holding the rings (yes, plural — more on that in a minute), quickly figured out that her plan to take a knee would put her head underwater, so she had to improvise again.

"Listen, I had all these other plans today," Hoover recalls telling Eden. "I had another place where we were actually wearing clothes and not bathing suits to propose. But we love the water, so you know, I see no problem with asking you to be my wife in a pool right now."

"It was perfect," says Eden, savoring the tearful moment she said yes as the rings — four in all — were slipped on her finger.

And about those stunning rings: The couple say they'd been shopping for months when they finally settled on complementary stacking rings, which they purchased late last year. Eden's four include two diamond-studded, tiara-shaped bands that surround a third, a diamond solitaire; all are topped off by a V-shaped gold band. Hoover picked out five rings: two diamond pavé bands, one accented with turquoise, as well as a diamond solitaire and tiara-shaped bands that mirror Eden's. Their creative approach means they won't have an additional designated wedding band.

"You can change them out or reorder them," Eden says about the quartet and quintet of rings. "We just thought they were so fun."

The rest of the couple's Sedona weekend was spent relaxing, enjoying the dramatic desert scenery and hiking into the surrounding rock formations so Hoover could re-create her proposal, taking the classic stance for photographs.

Still, the vacation ended with Hoover's own ring finger bare. And Eden hadn't dropped even a hint about her big secret: By total coincidence, she'd already planned her surprise proposal for the following weekend back in Nashville — and PEOPLE was part of the scheme!

This past Saturday, the couple had their hair and makeup done, and they dressed to the nines for what Eden told Hoover would be a PEOPLE interview, to talk about her Sedona proposal, at the recently opened Virgin Hotel on Music Row.

But when they reached the rooftop terrace, no reporter was in sight. Hoover stared at the empty scene, and it just didn't compute.

"Yes," Eden announced, giving up the ruse, "I'm proposing to you." (And yes, obviously, there would be a PEOPLE interview, but of course it had to wait until after Eden's proposal.)

When the moment arrived for Eden to lower to one knee and profess her love, even as tears flowed, Hoover couldn't help but wonder, where were her rings? Then, from behind the scenes, Dolly, the couple's Maltese-Yorkie-poodle mix, trotted out with the five bands attached to her collar. Eden had enlisted a friend to help make their cute pup a part of the occasion.

"At that point, Hilary thinks that Dolly's the big surprise, right?" Eden says.

Not so fast. Queued up in a nearby stairwell, waiting to emerge, were several of the couple's close friends and Hoover's family members, many of whom had traveled to Nashville just to celebrate the couple's betrothal.

As the group poured out onto the terrace for an engagement party, Hoover stood in shock. "It was just the cherry on top of all of it," she says. "Obviously, I would have loved a proposal that was just us, but I was so overwhelmed to see everyone there. I just never imagined my whole family being in Nashville. I kept looking at her [Eden] like, 'I'm impressed with you. I knew you were up to something, but you had to do a lot to get all these people here!'"

In this pandemic era, Eden says she had the miracle of modern medicine to thank for her guest list: "Her whole family is vaccinated. All of our friends are vaccinated. We're vaccinated. So it was like, let's go!"

Today, the two women are just relishing calling each other "fiancée" as they think about planning a wedding for some time next year. They'll have to do it around all the new momentum that Eden's career has generated since she released three buzzy new singles and accompanying music videos (which also feature Hoover).

And how can their wedding possibly top those two over-the-top proposals?

"That's a solid question," Hoover says with a chuckle. "Of course we're excited to get married, but we've been committed to each other for five years. So I don't feel like the wedding will be this huge step for us as much as it will feel like we're so excited to spend time with all of our loved ones together."

That's what Eden feels is most important, as well. "The wedding, to us, is a merging of our families and our friends, finally," she says. "You could put me in a basement, but if everyone's there, we would be so happy."

For Eden, part of the joy of being engaged now is simply no longer having to keep secrets from Hoover.

"That was really the hardest thing," she says. "We're such a team. Every single decision that I make, I go through Hil and just talk about it and make sure we're making the right decision. I couldn't do that for the last couple of months. So now I have my teammate again, and we're engaged, and I know that she's mine forever." 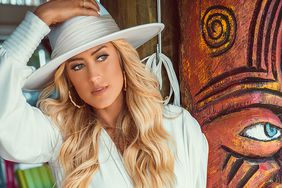 Out and Proud, Brooke Eden Is Singing About the 'Love of My Life' in New Singles: 'This Is My Girl'