A Look Back at Brett Eldredge's Country Christmases

Eldredge celebrates in 1986 at his grandma's house in Paris, Ill. with his brother Brice, 3. "Every Christmas Eve we would go to church, and then we would go over to my grandma's house — I have a million bajillion cousins — and just open gifts," he says. "We still do it to this day."

Eldredge cozies up with his older brother Brice and father Chris on a childhood Christmas Eve. "We had to dress to impress, so we were always wearing suspenders," he says. "I still like to rock bowties."

Eldredge fondly remembers spending Christmases at home in Illinois. "Right behind that tree on the other side of that wall there's a lake, and some of my best memories of life are right out there on that lake," he says. "We'd ice skate and run around on the ice and go ice fishing. It was a great place to grow up."

Eldredge and his brother Brice gather with all of their cousins. "We were the only guy cousins," he says. "It was he and I and all these girls, so they would always try to dress us up in stuff we didn't want to wear!"

"I remember being scared to death of Santa!" says Eldredge (here with brother Brice). "There was a mobile Santa house, and you'd sit on Santa's lap and tell him what kind of Ninja Turtles stuff or whatever you wanted."

"I used to wear that shirt [all the time], so I was probably pretty pumped," says Eldredge. "I still love the Ninja Turtles."

"Eventually I got over my fear of Santa," jokes Eldredge.

"We used to go to this place called Blair's Tree Farm an hour outside of my town, and we would actually chop down the tree ourselves," says Eldredge, noting that he made the shirt he's wearing. "It looks like I'm rocking my awesome, artistic style." 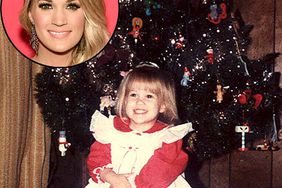 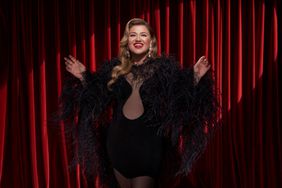 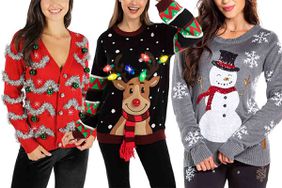