Blake Shelton and Gwen Stefani got engaged in October

Blake Shelton is grateful for a lot of things, but especially his new fiancée, Gwen Stefani.

Over the weekend, the country music singer took home the trophy for top country artist at the 2020 E! People’s Choice Awards and gave Stefani a special shout-out during his acceptance speech.

"Wow. This is crazy. This is absolutely insane," Shelton, 44, said. "I'm so happy that we're able to have this award show in spite of everything."

He then thanked his fans, adding that while he doesn’t "spend a lot of time on social media anymore," but when he does, he sees their outpouring of support. This is the second year in a row that his fans have voted him the top country honor at the People’s Choice Awards.

Shelton then switched gears to share some love for the "Hollaback Girl" singer, 51. The pair got engaged last month after five years together.

"Thank you to my new fiancée, Gwen Stefani," he said. "That's S-t-e-f-a-n-i, if you need to Google it to figure out who she is. Thanks for the inspiration and I love you guys, thank you."

During last year's acceptance speech, The Voice coach similarly shared a sweet message of gratitude for having Stefani in his life.

"Gwen Stefani, I love the s--- out of you," he said during the 2019 People's Choice Awards, according to Today.

The "Rich Girl" crooner shared some behind-the-scenes footage of the Sunday event, posting Instagram Story videos from the couple's car as she waited for Shelton to accept his award.

“So basically I have to stay in the car because of COVID but I’m here to support Blake in case he wins,” she explained in the video.

Stefani later showed Shelton getting his temperature taken before being allowed inside the awards show, as well as the duo jamming out to their duet, "Happy Anywhere," on the radio.

The happy couple has collaborated on several duets together, including "Nobody But You" — which hit No. 1 on Billboard's Country Airplay chart. They also share holiday song "You Make It Feel Like Christmas" and "Go Ahead and Break My Heart" from Shelton's 2016 If I'm Honest album.

On her Instagram Story, Stefani also casually flashed a glimpse at the stunning engagement ring that Shelton used to propose. She was pulling down her face mask to talk to her followers when the gorgeous sparkler came into view.

Shelton and Stefani first fell in love on the set of The Voice in 2015, bonding over their own recent heartbreak and respective divorces. They've been together ever since.

Shelton previously told PEOPLE, "When you're where she and I were, and you just feel so betrayed and on bottom, this bond that we formed when we found out what each other were going through, it's still there."

According to a source, the "God's Country" singer asked Stefani's son's — Kingston, 14, Zuma, 12, and Apollo, 6 — for permission before he got down on one knee last month.

"Blake told her boys that he wanted to propose and asked their permission," a source close to Stefani previously told PEOPLE. "Her family very much approves of him. He's an amazing partner and a great extra dad to the boys. Gwen is ecstatic. The proposal was a surprise." 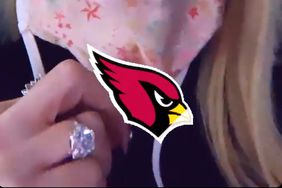