While chatting with Ellen DeGeneres, Shelton also joked about the friend of his he "purposely did not invite" to his wedding

Blake Shelton has it all with Gwen Stefani by his side.

On Monday, the country star went on The Ellen DeGeneres Show and spoke about his summer wedding to Stefani. The 45-year-old singer joked that he's already proven the critics right by being a "lazy" husband for not helping out with the wedding planning!

"At one point, I was saying in an interview, 'We're letting Gwen do whatever she wants for the wedding.' And then some writer wrote, 'Well, oh, look, he's already a lazy deadbeat husband,' " Shelton said, before joking, "But the truth is: I am."

"What do I know about that stuff?" he added, referring to wedding planning. "Of course it was her and her vision. And all I had to do was drink and kiss Gwen Stefani, I mean, my God. The greatest gig I've ever had."

One person was notably missing from Shelton and Stefani's guest list too: Shelton's former fellow coach on The Voice, Adam Levine. DeGeneres played a silly clip from before the couple's wedding where Levine joked that he "didn't approve" of their marriage since "she's so cool and he's not."

Shelton joked that his mom sent him that clip, before he revealed (jokingly, of course), "that's the reason why we didn't invite him to the wedding."

"I purposely did not invite Adam Levine to my wedding," Shelton said. "And I think it's funny!"

Shelton and Stefani hosted just close friends and family at their wedding with less than 20 guests. "That's exactly what it needed to be," Shelton said.

Shelton also spoke about their upcoming Christmas plans and what he'll likely get Stefani for Christmas. He said he tells her not to get him anything, but there ends up being "a pile of crap this tall" of gifts.

"Literally today I got on the phone with the internet company because they thought there was credit card fraud because I kept going back to this website buying her more stuff," Shelton said, before adding, "I'm getting her a bunch of stuff. I don't know that she's going to like any of it but it's going to look good in the wrapping paper, you know?"

Shelton and Stefani tied the knot at his Oklahoma ranch in July 2021. They got engaged in October 2020. Last month, he spoke to PEOPLE about their wedding vows, which they personally wrote for each other.

"The thing that got to me was she spoke about my [late] brother and my dad as if she had known them almost," Shelton said about her vows. "She didn't make it seem that way, but it felt that way as she was speaking about them. She said she wished they were there and what kind of men she thinks they must've been."

He added, "Man, it hit me. Like, I couldn't believe how hard it hit me. I felt like at this point, I've kind of gotten calloused. I guess I'm not because that absolutely slayed me. It's hard to even remember what else she even said. I'll never forget that feeling." 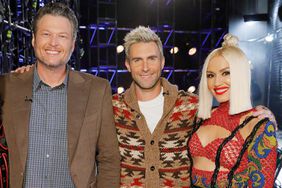