The country star recently opened up about social distancing at his Oklahoma ranch with his longtime love on SiriusXM's The Highway.

Blake Shelton doesn't need "Some Beach" to be happy!

"You wake up and look at the news and you're starting to realize that this quarantine is not working out too well for a lot of people who are finding out … they don't like being around each other as much as they thought they did, which is terrible," he told hosts Storme Warren and MC, referencing a recent rash of divorces in the country community, including Darius Rucker, Kacey Musgraves, and Carly Pearce and Michael Ray.

"She and I have experienced the opposite, you know, and we've been having a blast."

The Voice coaches have been social distancing in Oklahoma for the past few months alongside Stefani's sons — Kingston, 14, Zuma, 11, and Apollo, 6 — and a handful of her family members.

Shelton added that he and the No Doubt frontwoman are both thankful for the break from their hectic work schedules, having been active in the music industry since "our early, early 20s."

"Obviously, none of us like these circumstances, but I'd be lying if I said that I'm not having a blast being stuck at home for this long because I've just never gotten to do it. Since I've owned a home, I've never been able to be there more than two weeks max at a time," he said. "This has been an eye-opener, I told my manager, I said, 'Man, you might have a hard time getting me to go back on the road again actually.'"

The couple's at-home life inspired their new duet "Happy Anywhere." The romantic new song — their fourth together and first since their hit January duet "Nobody But You" — sees the pair croon about being perfectly content no matter where they are, as long as they have each other.

When the longtime lovebirds aren't making sweet music together, Shelton says they're trying out a few new hobbies — and reaping the rewards.

"We've been doing things that I wished I had time to do for the last 20 years," Shelton said on Friday's episode of the Today show. "Literally stupid things like pick blackberries ... We grew a garden. I grew several acres of sweet corn. Country things like that!"

He continued: "I can't be still, especially when I'm home. There's just too much stuff I want to do and want to experience." 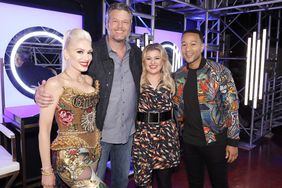 The Voice Is Back! Watch a Preview of the Upcoming Socially Distanced New Season