"And it's one of those things that, who knows?" Shelton tells Martina McBride on her podcast. "It had to have been meant to be."

Blake Shelton and Gwen Stefani are couple goals — even if Shelton is still surprised they got together in the first place!

Chatting with Martina McBride on her Vocal Point podcast (previewed exclusively with PEOPLE), the 43-year-old opened up about his “shocking” love story with his fellow Voice coach, even contrasting it with being crowned Sexiest Man Alive in 2017.

“If you thought the PEOPLE magazine cover was shocking, mine and Gwen’s relationship is probably the biggest head-scratcher,” he joked to McBride.

During his cover story interview with PEOPLE two years ago, the ever self-deprecating Shelton joked “that y’all must be running out of people,” and said it was actually Stefani who encouraged him to accept the nod.

On the podcast, the country star explained that during Stefani’s first season on The Voice, the two weren’t able to create a meaningful bond.

“I’ll even say that she was, of all the coaches, the least that I had gotten to know the first season she was on the show because she had just had a baby, and I mean just had a baby,” he said. “And so any time there was downtime, she was busy. She was gone, she was on her trailers, she was taking care of the baby, you know, and there was never those moments that usually happen on this show, where at the end of the day we’re sitting around out here at the couches and having a drink, talking, laughing.”

But everything changed on her second season in 2015 after “a lot of life had happened and we’d been through a lot, and we bonded actually over that,” he adds, alluding to their mutual divorces that year.

In August 2015, Stefani filed for divorce from her ex-husband Gavin Rossdale citing “irreconcilable differences.” The month before, Shelton announced his separation from Miranda Lambert. “This is not the future we envisioned,” Shelton and Lambert said in a statement then.

But now looking back, the “Sangria” singer is sure that everything happens for a reason.

“And it’s one of those things that, who knows?” he told McBride. “It had to have been meant to be.”

Shelton also gushed about his “most normal, unassuming, just Catholic girl from Anaheim,” saying that down-to-earth woman is the “Gwen that I know.”

Four years in, the country singer said he still gets starstruck when he watches his girlfriend perform at her Las Vegas residency.

“I’ll go watch her show in Vegas because you got to remember I’m playing catch-up on Gwen Stefani,” he says. “I knew who No Doubt was, and Gwen Stefani, but only the big hits, and then you go see her show in Las Vegas and you start going, ‘Oh my God, that one too, that song. Oh that’s you.’ You know? And it’s just a crazy… It gives me goosebumps talking about it because of the impact she had, especially as a female rock, ska, whatever you classify it, as just to have the impact that she has is pretty crazy.”

While “The Sweet Escape” singer has made her mark in the rock world, Shelton says Stefani has gone nearly fully country — even if she isn’t always familiar with the singers.

“If she was sitting here, she would tell you she’s never going to be good with names. She can’t remember anybody’s name,” he says. “She knows so many songs now. And in fact, I would say that Gwen, I don’t know how she’d feel about me saying this, but I’m going to say it. I bet she listens to probably 75 percent country music now.”

“Just that’s what in her car, that’s the station that stays on, when we’re together she has playlists. That’s what she puts her kids to bed at night to is country music playlists,” he adds.

Along with being a star on stage, Shelton confesses she also shakes things up in the kitchen.

“She cooks a lot. She loves parties, like family type parties where she can … [have] like festive foods and things like that,” he says. “We do a thing every year. Every Christmas, this will be the fifth one coming up, I guess, fifth or fourth. I can’t remember anymore, but we look up some kind of a unique dish that we try, and we always do a practice run and then we do the real one for Christmas.” 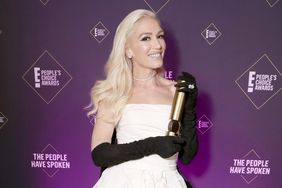 Gwen Stefani Denies Wearing Engagement Ring: 'When I Have Something to Say, I'll Say It'