The radio personality joins Reba McEntire, Kane Brown and others to preview the Country Music Hall of Fame and Museum's retrospective of 2018

Bobby Bones happily loaned out his Dancing with the Stars metallic gold jacket and blue velvet shoes to a new year-long exhibit at the Country Music Hall of Fame and Museum, but there’s one thing noticeably missing in his display case: the coveted mirrorball.

“I wasn’t giving it up,” says the radio personality who was the upset winner of the show’s 27th season. “That’s the closest thing I have to a child. I’ve started a scholarship fund for that thing.”

That is perhaps the only disappointment of “American Currents,” which officially opened Friday at the Nashville museum. Bones was among the stars who attended a preview of the exhibit on Tuesday.

Dedicated to the past year in country music, it’s chock-full of memorable artifacts, among them: the rainbow ribbon and brilliant blue gown that Reba McEntire wore to the Kennedy Center Honors in December, Luke Combs’ handwritten lyrics to No. 1 hit “She Got the Best of Me,” Dan + Shay’s jackets in their “Tequila” video, and the dress and boots Carly Pearce wore for her Grand Ole Opry debut.

McEntire also attended the preview, and the Hall of Famer declared herself “thrilled to pieces” that the museum had added to her already significant presence within its walls. She recalled sharing the Kennedy Center festivities with fellow recipient Cher, but she revealed there was barely an opportunity for the two music icons to connect.

Had she? Unbeknownst to the pop diva, McEntire was actually discovered by country artist Red Steagall when she sang “The Star-Spangled Banner” at an Oklahoma rodeo in 1975. “To tell you the truth,” McEntire explained to Cher, “that’s where I got my start in the music business, and she said, ‘Oh, okay,’ and that’s about all we got to talk about.”

Kane Brown showed up at the museum to inspect the favorite jacket he parted with for the year; he wore the purple Amiri apparel at the 2018 American Music Awards when he won favorite country male artist. But don’t think he’s been suffering without it for too long.

“Amiri was so grateful it’s in here,” he revealed, “they just sent me another one.”

Brown expressed excitement about his recent ACM nomination for single of the year (for “Heaven”), though he confessed he’s dreading the temptations of Las Vegas, where the awards ceremony will be held in April.

“I can’t be in Vegas longer than an hour,” he said. “I gamble. [Last year] it was going great until my wife left the table, and then it went bad.”

So Katelyn Jae is his good luck charm?

“Yeah,” he allowed, adding, “and she also just messed up the hand.”

To express the genre’s “unbroken circle” through the years, several country newcomers were paired with established artists in the exhibit. Among the pairings were Carly Pearce and Grand Ole Opry doyen Jeannie Seely. The two have become fast friends through Pearce’s many appearances on the Opry, and Seely revealed she has already received her save-the-date card for Pearce and Michael Ray’s wedding. Seely and Pearce are now neighbors, and the two have gone biking together and shared a few glasses of wine.

Neo-outlaw Ashley McBryde and celebrated songwriter Matraca (“Strawberry Wine”) Berg were yet another exhibit pairing. Ten years ago, McBryde attended a Berg tribute at the museum and afterward received her autograph. Just weeks ago, the two got together for a first-time songwriting session.

“We’re both kind of shy, so it took a minute just to break the ice,” Berg recalled. “But once we hit it … she’s like me. She just gets down to business, and it was wonderful.” Berg also revealed the song’s pure-country topic: Momma’s mascara.

“American Currents: The Music of 2018” officially opened on Friday, and the exhibit runs through next January. By the way, if you want to see that mirrorball, you’ll have to wrangle an invitation to Bobby Bones’ house.

He explained that he had been taking it on the road, letting “everybody” hold it — until someone accidentally chipped it. “I was like, all right, time’s up,” the saucy DJ said. “No more mirrorball. It’s on the counter until I build a full, life-size trophy of myself holding it. I’m still trying to sculpt that out of butter right now.” 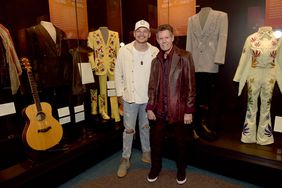