Miranda Lambert Says Husband Brendan McLoughlin Is a 'Trouper' Ahead of ACMs: 'He's a Great Date'

The most decorated artist in ACM Awards history tells PEOPLE that having her husband with her keeps things fun: "He gives me new joy about it because he's kind of bright-eyed and excited"

Miranda Lambert couldn't be more thrilled to have husband Brendan McLoughlin by her side when she hits the red carpet.

The country music star, 37, shares with PEOPLE that her retired New York Police officer partner actually enjoys the process of attending flashy events more than she does, even as she put him to work ahead of the 56th Academy of Country Music Awards.

"Brendan was holding the jackets and the guitar case today, poor thing. I'm like, 'Hey, thanks for coming to the ACMs, can you make me another drink?'" she jokes during ACM Award rehearsals. "He loves it, actually. He's super glam, like he's one of these 'Dapper Dan' type dudes."

"He likes the whole glam part of it more than I do, so I think he's a little sad that we're not doing the whole real show thing with the red carpet, but I'm sure he'll still show up in a tailored jacket," she adds.

With the ongoing coronavirus pandemic forcing artists to downsize their entourage for events, she admits McLoughlin, 29, has had to provide extra assistance.

"When we're out here, like today, me and my manager always say we are our people, but especially right now during COVID, because you don't get any credentials," she says. "So like everyone does everything — I mean all hands on deck. But Brendan's a trouper. He's just fun, and he's a great date, no matter what we're doing."

Lambert is the most decorated artist in ACM Awards history, and while she is up for another four trophies this year, she reveals having McLoughlin with her helps to keep things from getting stale.

"Every year, I can't believe I'm still part of this and my peers still are allowing me to be in the country music family, and caring about what I do," she says. "But it's fun to bring a husband into this whole family that was from New York City and didn't know a lot about country music. He gives me new joy about it because he's kind of bright-eyed and excited and ready to have fun!"

"It reminds me like, how dang lucky are we?! This is really fun."

Lambert opened the ACM Awards with fellow singer-songwriter Elle King as the duo perform their new hit "Drunk (And I Don't Wanna Go Home)" live for the first time. After a year of rest, she admits it wasn't easy to jump back on stage with the band.

"It was hard," she says with a laugh. "I mean, honestly we had never sang it together live at all, and none of us have done shows in a really long time, so it's a weird feeling. I think it took us a couple of passes to realize that's what we were doing, like on stage with a band. There were people out there, they were distanced with masks, but they were clapping and it was like, 'Oh, what do you mean?'"

"It's a weird feeling. It's excitement, but also it's a hard song to sing," adds a very pregnant King, 31, about how their rehearsal went. "We did good. We nailed it. Applause? This feels nice. I think I like that. I think it's a good thing."

The longtime friends are happy to "have a lot fun together" again after the last year, and believe they crafted the perfect song to make it happen.

"Even when we're nervous and we've worked all day and we have hair and makeup and all the things that we're doing, when we get out there to sing together, we kind of come back to the root of it," Lambert says. "And it's fun to sing a song called "Drunk" with a pregnant lady."

"You know, if I wasn't pregnant, I could be throwing up from drinking, but now it's different," King jokes. "We just keep saying that I'm drinking for two," Lambert points out.

King and fiancé Dan Tooker are expecting their first child after she struggled with infertility and previously suffered two pregnancy losses due to polycystic ovary syndrome (PCOS), a condition that causes a hormonal imbalance.

The Grammy-nominated rocker is feeling "tight" as she gets used to performing while pregnant, but she's enjoying sharing this moment with her forthcoming baby.

"It's a really sweet thing because [Miranda's] done this kind of stuff a whole bunch of times, but it's a big deal for me," she explains. "And to know that I could tell my kid one day I did that one cool thing and you were there, it's cool."

Rob Schneider Celebrates Daughter Elle King's Pregnancy: 'I Know How Much You Wanted This'

"My fiance and I are really, really excited and my family's excited," she adds. "This is going to be the first grandbaby for my dad and one of many for my mom, so we just can't wait. I feel like I've done a lot of things that I shouldn't have done in my life and this feels like something that I should do.

"I just can't wait to meet them and you know, Miranda will babysit," she says, glancing over at her reluctant bestie, "or our husbands will."

Once the baby has arrived, the first thing King plans on doing is: "drink with Miranda again."

"I lost my drinking buddy for a little while, but we're going to Casa Rosa and we're going to do tacos after 10, and have all the cocktails," Lambert exclaims.

The 2021 ACM Awards are airing live from Nashville on Sunday from 8-11 p.m. ET on CBS and Paramount+. 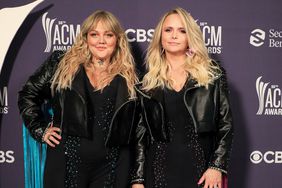