Brett Eldredge on Turning 30 the Same Week His Latest Single Went No. 1: 'It Was Overwhelming'

"It was like, if 30 is this good, I can't wait," the musician tells PEOPLE

Brett Eldredge just notched his fifth consecutive No. 1 song and he’s up for male vocalist of the year at the Academy of Country Music Awards on Sunday, both very impressive feats in their own right. But he finally felt like he’d made it Thursday – when he saw the seating chart.

“I just had one of those moments. I’m sitting by Keith Urban and Little Big Town,” he told PEOPLE after his ACM rehearsal at Las Vegas’ MGM Grand, saying he used to watch the show on TV and from the cheap seats. “I’ve toured with all these people, so it’s cool to sit with the people who helped me get [here]. That was a big moment just now.”

Eldredge’s life is chock full of milestones these days. The singer turned 30 last week while his song “Drunk on Your Love” sat at No. 1 on the charts.

Still, Eldredge knows that with age comes one unavoidable evil that he s going to have to deal with.

If all goes well for Eldredge, he’ll celebrate with a little extra hardware too. But if not, he’s still celebrating a tune he cowrote in 2012 topping the charts years later.

Eldredge always thought the song had potential, but he didn’t anticipate it landing on his most recent record Illinois. However, after a demo version soundtracked Florida Georgia Line‘s Tyler Hubbard and his wife Hayley’s wedding video premiere on PEOPLE.com, things changed.

“It didn’t happen by mistake but I didn’t expect it to make this album,” Eldredge said of the song, which he’ll perform on the show. “I wanted it to be a single on the radio eventually, but I didn’t know it was going to fit.”

He continued, “A song I wrote four years ago stuck with me. Don’t ever forget about those songs. ‘Drunk on Your Love’ is special because I wrote it with Ross Copperman – I didn’t have any hits, he didn’t have any hits and he just won ACM songwriter of the year! That’s why it’s special.” 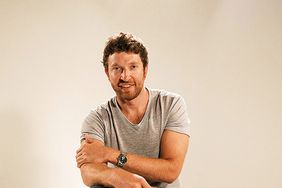