"My beautiful date tonight! MOM!! #CMAawards," the male vocalist of the year nominee wrote on Instagram

There's nothing sweeter than a mother-son moment!

On Wednesday, Thomas Rhett posed on the red carpet of the 2021 CMAs with his date — his mom Paige Lankford! The country singer, 31, wore a maroon suit and black t-shirt while Lankford, 51, shined in a sparkly black dress. (Thomas Rhett last brought his mother to the award show in 2014.)

"My beautiful date tonight! MOM!! #CMAawards," he wrote on Instagram with a photo from the CMA photo booth.

On any other occasion, Thomas Rhett would typically show up with his wife Lauren Akins. However, this time around, Akins is set to deliver the pair's fourth daughter any day now.

Before the show, the mom-son duo had a little CMA pregame moment.

"Here at the CMAs tonight… like son like my mother. We're doing the wine and whiskey thing here," Thomas Rhett said on his Instagram Story as he held a bottle of whiskey while his mom showed off a bottle of wine. "Mom you look pretty!"

"Thank you!" replied Lankford with a smile.

At the show, Thomas Rhett was up for male vocalist of the year, and he is set to perform his single "Country Again."

Upon the announcement of his performance last week, Thomas Rhett tweeted he "Can't wait to return to the #CMAawards stage next Wednesday night!!"

Thomas Rhett is joining a star-studded line-up of performers which include Luke Bryan who is hosting the show, Keith Urban, Gabby Barrett, Jennifer Hudson, Bentley featuring BRELAND and HARDY, and Zac Brown Band.

In April, Thomas Rhett won the ACM Award for male artist of the year — which he previously took home in 2017.

"It just feels incredible to be in this category, to be honest with you," he continued. "It's literally my heroes, sitting right here in these seats. So thank you Lord, we love you."

At the time, he was also up against Bentley, Church, Combs and Stapleton. 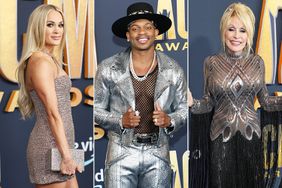 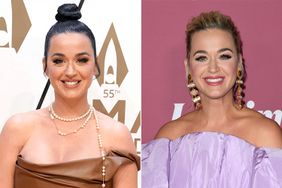