Prince Royce has come full circle. The bachata crooner, 28, who used to sell cellphones at a Sprint store in the Bronx, is now partnering with Sprint on “The Dreams Academy” campaign to help aspiring musicians. “Everything in my life has been a dream come true. I’m so grateful,” he tells PEOPLE CHICA. “From working at a Sprint store to now being in Sprint commercials and hanging out with the Sprint CEO, it truly is a dream come true.”

The contest opens Dec. 11 and contestants must submit their entries as YouTube videos that showcase their musical talent with the hashtag #LiveUnlimited. (Visit sprint.com/dreams for more info.) The champion will get a $10,000 award and a chance to meet the 19-time Billboard Latin Music Award winner. $5,000 prizes will be given to those who place second and third.

“It’s such a great way to give back to the community and to give back to those young kids that are musically inclined and need the money to continue working on their musical careers,” adds the “La carretera” singer, who used the money he earned as a cellphone salesman to record his self-titled first album back in 2010. Royce will serve as a mentor to the winner, offering advice on how to write a song, put together a demo and get a record deal.

As important as it is for Royce to give back during the holidays, spending quality time with his loved ones is a top priority. Christmas dinner in New York City is a fun, high caloric feast, the Bronx-native says. “It’s definitely Dominican style, with sancocho, lasagna, rice and beans, plantains, salami, cheese, and leftovers that we eat for like three weeks after,” he jokes. “All my aunts do their own dish, and we all get together at my mom’s house. We have barbecues, hang out, play video games.”

Royce, who lives between Miami and Los Angeles with his girlfriend Emeraude Toubia, forgoes decorating either home because their nomadic lifestyle keeps them on the move. “We are never really there. We are always traveling,” he says, but they get festive with their families.

“We do what everybody else does. We take shots. We do the countdown. The kiss. You gotta do it!” he says of their New Year’s rituals.

Since the November release of his single “Sensualidad,” featuring J. Balvin and Bad Bunny, Royce has been working on new music and collaborations. “We are going to party it up,” he says. “I’m looking forward to a great new year!” 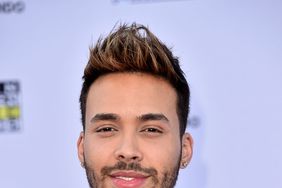