"We kind of wanted to make it a little edgier and kind of switch it up," Zendaya said of the clip

Zendaya‘s got a new music video on the way, and it’ll likely have fans pressing “Replay.”

The actress-singer, 19, will soon release the music video for “Neverland,” her track from last year’s Broadway hit Finding Neverland – and PEOPLE has an exclusive sneak peek at the forthcoming clip.

“I thought it was really cool because [songwriter] Gary Barlow allowed every single artist to do what they wanted with it and make it their own, so I had a lot of freedom to add harmonies and add my own personality to it,” Zendaya said of creating the song for Finding Neverland the Album, which featured contributions from Christina Aguilera, Jennifer Lopez, John Legend and more. “As an artist, that’s a great place to be.”

When it came to filming the video, the creative team called former Dancing with the Stars pro Maksim Chmerkovskiy – who recently popped the question to fellow dancer Peta Murgatroyd – and Ian Eastwood to choreograph. (See: the 37-second mark to check out their hip-hop-infused fancy footwork.)

“We wanted to make it a little edgier and switch it up – I feel like it has the vibe of the play but a different kind of feel to it. It’s really, really cool,” said Zendaya.

“I really love how the play did a good job of connecting the imagination with the real story of how Peter Pan came to life,” added Zendaya. “So I think it was really engaging, and it’s good for all ages.” 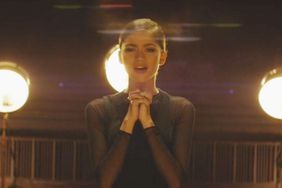