Zayn Malik Opens Up About Taylor Swift Putting the Stamp of Approval on His Debut Album: 'I Kind of Blushed a Bit'

"At Gigi's house, we briefly spoke and she told me she really enjoyed the album," Malik says in a new interview

Zayn Malik may be done with boy bands, but he’s definitely in with girlfriend Gigi Hadid’s girl squad.

While the star says he didn’t “get much feedback from my peers” about his debut album, Mind of Mine, he did get the nod of approval from the pop queen herself, Taylor Swift.

“At Gigi’s house we briefly spoke and she told me she really enjoyed the album,” Malik recalls in a new interview with Dazed about the time he showed his tunes to Swift.

RELATED VIDEO: Are Zayn Malik and Gigi Hadid Still Together?

Malik released Mind of Mine one year after it was announced he was departing from One Direction.

“It was nice to get some feedback,” he says. “She said she thought I was cool and I kind of blushed a bit and didn’t know how to take it.”

And it turns out he’s been longing to prove himself to more than one person in recent months.

Malik and Hadid briefly split earlier this month after seven months of dating, but sources confirm to PEOPLE they’re in fact back on and happier than ever.

“They have been working on their communication and being honest with each other and so far things are great,” says a Hadid source. “They were fighting all the time and Gigi caught Zayn in a handful of lies and couldn’t take the mystery anymore, so she dumped him.”

After Malik called off a show on June 11 at London’s Capital Summertime Ball due to anxiety, the model took to Twitter to show her love and support for her boyfriend.

“Z – I’ve seen the battles you go through and the way you fight to get to a place that allows you to get up there for your fans,” Hadid wrote. “Your bravery in those times makes me proud, but your honesty last night proved what you’re all about, being real. Human recognizes human. You made the best of the situation and have given your fans an opportunity to understand you better as a performer.”

She continued, “Those who can find compassion now are the ones that deserve to watch you continue to grow,” she continued. “We are all here to support you and make each experience easier. Your talent and good heart will never lead you wrong. Love you and so proud of you always ? xG.” 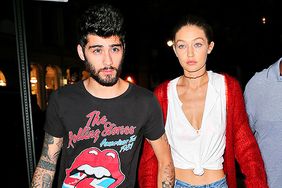