Zach Galifianakis is apparently about to be a bachelor no more!

The Hangover star, 42, will marry his longtime love Quinn Lundberg, 29, on Aug. 11, according to Celebuzz, which obtained a copy of the wedding invite.

“While it has the formal and standard details of who, what, when, where – including Zach s full name Zachary Knight Galifianakis and his fiancée s, Mary Quinn Lundberg – it is also very funny,” a source tells Celebuzz. “Zach included a drawing of himself and his bride-to-be. He made sure he looked like a little troll, while Quinn is a stunning tall blonde princess.”

There’s no word on when Galifianakis got engaged to Quinn, who is vice president and co-founder of Growing Voices, a charity dedicated to giving back to the community.

A rep for the actor was not immediately available for comment.

Galifianakis next appears with Will Ferrell and Jason Sudeikis in The Campaign, and the Hangover franchise will continue next year with its third installment, also starring Bradley Cooper and Ed Helms. 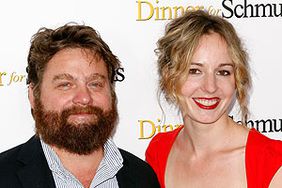 Zach Galifianakis: Did He Get Married over the Weekend?