Isabelle Dinoire, the world’s first face transplant recipient, died on April 22, according to French doctors. She was 49.

The mother of two passed away “following a long illness,” said Amiens Hospital, which performed the surgery in November 2005, in a statement. The announcement of her death was delayed for months “in accordance with the will of her relatives” and “no obituary was published in the press in order to protect their legitimate privacy at that painful time.”

Amiens Hospital did not release Dinoire’s cause of death but the French media reported that the former factory worker succumbed to complications from her recent face transplant in winter 2015 which caused her to lose use of her lips.

It was also reported that she suffered two cancers, a side effect due to the heavy antirejection drugs during her recovery. In June 2006, Dinoire’s doctors had upped the antirejection doses after swelling and redness were found on her body when she suffered rejections of the transplants she had received.

Dinoire’s November 2005 procedure was not only history-making, but it was also a much talked about and highly controversial topic at the time that questioned the ethics of such a risky experimental surgery instead of a more conventional reconstructive procedure.

Her face – at age 38 – was surgically restored six months after her pet Lab mix Tania mauled her in a bad accident that left only her eyes intact. Using the nose, lips and chin of an anonymous brain-dead donor, a 50-person team led by French surgeons Jean-Michel Dubernard and Bernard Devauchelle spent 15 hours performing the world’s first partial face transplant, replacing skin, nerves and muscles that had been torn away by the family dog after Dinoire took sedatives and fell into a deep sleep.

After the life-changing surgery was deemed a success, Dinoire’s mental stability was doubted when she admitted that on the night of the dog attack, she took sleeping pills in a suicide attempt. Ironically, the anonymous donor, who was a 38-year-old woman, had committed suicide by hanging herself.

In addition, Dinoire was criticized for drinking alcohol and chainsmoking cigarettes just months into her post-procedure.

“It may be someone else’s face but when I look in the mirror, I see me,” Dinoire told PEOPLE exclusively in a December 2006 interview, adding, “There have been problems. But I am getting on with my life.”

Isabelle is survived by her daughters Lucie and Laure.

The Face Transplant: One Year Later

The Face Transplant One Year Later

Face Transplant Update: 'It Will Never Be Me' 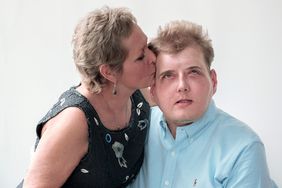 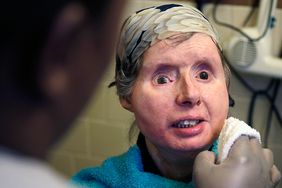 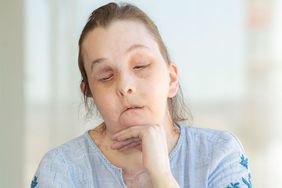 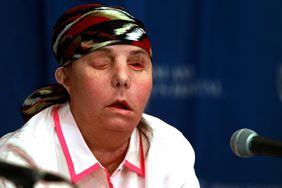