'Without a Trace' Star Roselyn Sanchez Gets Engaged

The actress will marry Eric Winter of Days of Our Lives

Without a Trace star Roselyn Sanchez and actor Eric Winter were engaged while on vacation in the Caribbean, her rep confirms.

Sanchez, 34, and Winter, 31, who have been dating for two years, have not yet set a date and location for their wedding, her rep told PEOPLE on Tuesday.

The Puerto Rican-born Sanchez and Winter got engaged on the resort island of Vieques, east of mainland Puerto Rico.

In addition to her work on CBS’s Without a Trace, Sanchez has been ranked among the world’s sexiest women by Stuff and Maxim magazines. Winter has appeared on Days of Our Lives and CSI: Crime Scene Investigation.

Their engagement was first reported by the Associated Press. 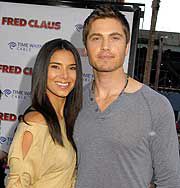 'Without a Trace' 's Roselyn Sanchez Ties the Knot