Will Smith, Jada Pinkett Smith Not Splitting, His Son Says

Plus: Rep tells PEOPLE, "rumors regarding Marc Anthony and Jada are false"

Are Will Smith and Jada Pinkett Smith calling it quits?

A tabloid reported Tuesday that the A-List Hollywood couple, who’ve been married for 13 years, are separating. But Trey Smith, Will’s son from a previous marriage, says not so fast.

“Did #WillandJada split? No they did NOT split! False information … its not true RETWEET!!!” Trey posted to Twitter Tuesday. “Everyone can think what they want … even if its not true.”

Other rumors circulating involve a hookup between Pinkett and her recently separated HawthoRNe costar Marc Anthony.

“All the rumors regarding Marc Anthony and Jada are false. Completely untrue. As for [the reports of a split between] Will and Jada, I’m not commenting on their personal life,” Jada’s rep, Karynne Tencer, tells PEOPLE.

Adds Anthony’s rep: “We unequivocally deny this. Enough is enough. There are families involved, children involved, friendships involved. This is NOT true.”

Will and Jada, who married New Year’s Eve in 1997 near Pinkett’s hometown of Baltimore, met in 1990 when she auditioned and was rejected for the role of Smith’s girlfriend on his breakout sitcom The Fresh Prince of Bel-Air.

The couple have two children together, son Jaden, 13, and daughter Willow, 10.

After Smith spent time early this summer filming Men in Black 3 in New York City, he and Pinkett looked happy vacationing together in Hawaii. 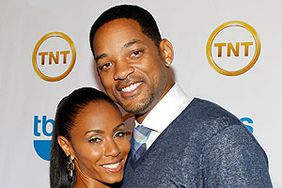 Will Smith and Jada Pinkett Smith: 'We Are Still Together'